Troy Roberts and Tim Jago may be Best Buddies but the musical locking of horns is palpable – all in a ‘best buddy’ sort of way, but through fierce, scorching performances, nevertheless. Listeners whose ears are attuned to the roar of the tenor saxophone will no doubt be familiar with Mr Roberts’ viscerally energetic style of playing. The surprise [relatively speaking] will come from listening to Mr Jago’s fleet-fingered, pristine lines played almost always here at great speed, yet never missing a heartbeat. Sometimes the voices of the two musicians run at counterpoint to one another, but more frequently, as on the giddily fast “Chythm Ranges” the two men fly in each other’s wake – sometimes the saxophonist leads in trading a few bars with the guitarist, who takes over and challenges the saxophonist to a harmonic duel. 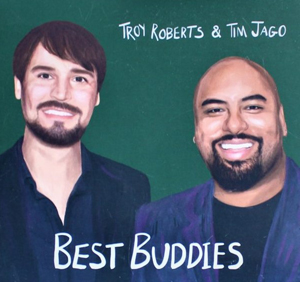 It is not all in good fun, as it may seem. Both musicians are deadly serious about their art and their respective virtuosic performances. This is true even is they may seem to be dallying in the balletic “Best Buddies” that features pirouetting, leaping harmonic changes that seemingly reach ever upward before landing softly. However, the whole session was also meant to be fun. This is eminently clear from the puckish word-play – from “Chythm Ranges” to the bouncing chart entitled “A New Porpoise”, the tongue-in-cheek “Pho Twenny” and the subtlest one of all: “Halfway House in C Major”. It’s all in good fun after all.

These are subtly musical performances and each is sufficiently exceptional to stand out on its own. Certainly the quietly expressive single-note lines punctuated by chopped chord of Mr Jago’s guitar nestles cheek-by-jowl with the raw poetry of Mr Roberts’ saxophone playing throughout. The incessant chordal jabbering under Mr Roberts’ playing on “Evil Eye” is quite brilliant. Both musicians not only challenge each other to stretch to the melodic and harmonic limit, but also draw the bassist Karl Florisson and drummer Ben Vanderwal in their wake. Bassist and drummer create an impressive rhythmic wall, which holds up impressively and allows the two principal characters to flourish. Also noteworthy is the fact that all four musicians deliver astonishing technical fireworks – especially on the opening and closing numbers. Certainly a CD to die for…