That the Brasilian ensemble, Trio Ciclos, have a follow-up to their benchmark improvised recording mobiles vol. 1 is itself a courageous act. After all it was hard to see where drummer Alex Buck, contrabassist Bruno Migotto and pianist Edson Sant’anna would go from the genre-bending music of that recording. But that assumption failed to take into consideration two things: firstly the vast canvas of artistic styles and forms that the musicians have been born into and draw from; secondly that their own musicianship bristles vividly with both intellect and imaginative intuition and finally that each is not simply a virtuoso on his instrument and is able to discern how far he can push this virtuosity, but also capable of creating music quite beyond the scope of the instrument he uses to express himself. 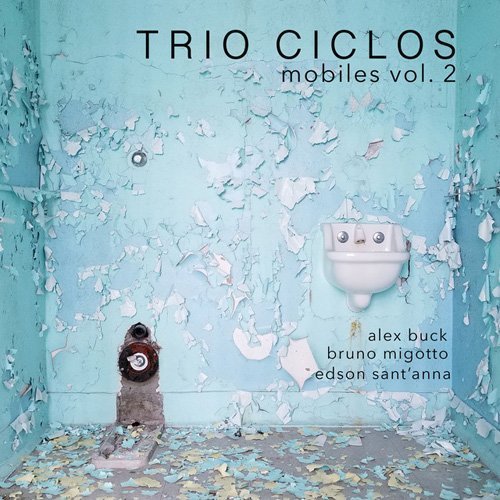 Expect nothing less, then, from mobiles vol. 2. And it does not disappoint right from the storm-tossed opening “Prólogo” that begins with the earth-shattering agitation of cymbals combined with the elemental rumbling of the contrabass and playing inside the piano, not to mention masterfully arranged electronic sounds that foreshadows the kind of musically galactic experience that is to follow. Make no mistake, however, all of this music comes from the Brasilian experience. The title of the showpiece “Choro Mobile” comes from the deep and authentic Brasilian lament expressed in song in a form celebrated by great composers such as Pixinguinha and Jacob do Bandolim. But what is most arresting about the song is that each of the musicians has developed into an individualistic, difficult-to-classify personal musical voice.

Here, as in the rest of the repertoire – notably also “Mobile Universal”, which is dedicated to another Brasilian iconoclastic artist, Hermeto Pascoal (O Bruxo) – we come face-to-face with music that has its roots in Brasilian choro, as much as maracatu nação or maracatu de baque virado, afoxê arising from deep inside ijexá – all of which is played in such a dramatic and flamboyant manner as to evoke and even conjure the elaborate rhythms and dance of capoeira. It’s all quite magical. Of course this is what the musicians set out to do in the first place which made that wonderment about being able to re-create the excitement of mobiles vol. 1 pure conjecture. The principle tribute to all of this is of course the mind-bending art of the great Alexander Calder.

Having been treated to music where there’s so much going on beneath the surface; where Mr Buck, Mr Migotto and Mr Sant’anna subtly mix in the elements of Brasilian rhythms, electronic music, rock, contemporary music and even the occasional noise music it’s hard not to fall prey to the arresting manner in which these musicians wield their tonal palettes; their sonic creations, a veritable mistura fina that stimulates mysterious narratives evoking the work not only of Mr Calder, but also visionary painter Edward Hooper and the masterful film director David Lynch. . To be witness to the madcap melodic, harmonic and rhythmic adventure of “Quodlibet”, which later gives way to the open-ended angst of the composed and improvised “Epílogo”, is to come face-to-face not only with what’s left unsaid, but to the myriad of unexpected things to come from this brilliant Brasilian trio.