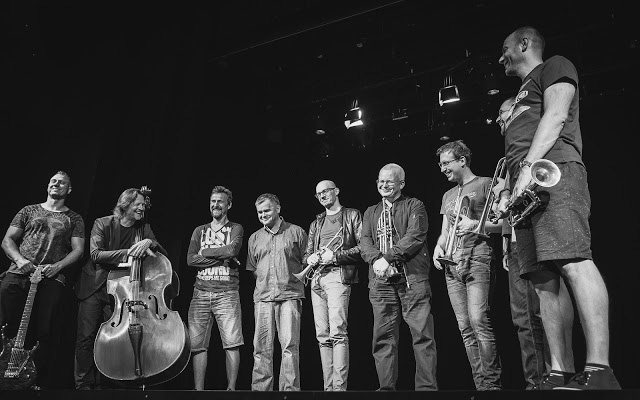 Anyone who has listened to and been privy to an Andrej Przybielski performance will attest to its (his) sense of the theatrical. His eyes, rarely visible, Przybielski often donned dark glasses, the like of which Rahsaan Roland Kirk used to wear. But if you couldn’t see his eyes flickering as the notes shot out from the bell of his trumpet, their accented tattoo seemingly danced in the air around him, causing the said rapid-eye-movement albeit behind the said dark glasses. Of course, not all of Przybielski’s music was played at machine-gun-pace. Many of the melodies that the trumpeter wrote danced in ever-widening circles as notes and phrases came, as if blooming, out of the horn. All of this and more is captured especially by the six trumpeters, who make up this ensemble and who, along with a guitarist, bassist and drummer, imagine – with poignant dramaturgy – the music of Andrzej Przybielski on volume one of what promises to be an ongoing tribute to an iconic Polish musician.

This hour-long tribute is divided into four compositions by Andrzej Przybielski and three improvised sections. This is capped by a 12:44 long section on which Przybielski talks about music, plays exercises and music on the trumpet and on – and inside the guts of – a piano. It is a riveting session, full of wonderful performances by the six-trumpet ensemble which has been embellished by the guitarist Jakub Kujawa, double bassist Grzegorz Nadolny and drummer Grzegorz Daroń, the latter three of whom rise to the occasion on “Afro Blues”, “Hey Jack”, “W Arce” and “Motyw Afro” in particular. All of these pieces have been written in an idiom that melds Jazz and The Blues, 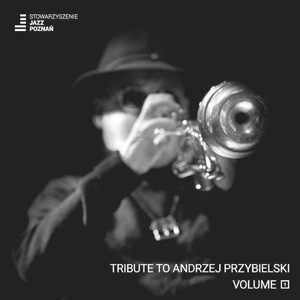 which are rather well-interpreted (and extrapolated upon) by the ensemble. The idea of arranging four trumpets each to voice the melodies out of left and right channels respectively is a good one and serves not to overload the speakers with brassiness. The deliberate attempt to obfuscate individual voices is a good one as it makes Przybielski the rightful hero of this session.

Still, one can pick out Maciej Fortuna even from deep within the ensemble passages. His liquid lines are forged a viscous blend of spontaneity, freshness and poetic intensity and although they often underplay the soaring, youthful vitality of Andrej Przybielski, Fortuna and the quintet do succeed in uncovering the marvels of their hero’s music in a fresh context. The loud symphonic perorations to “Free I”, “Free II” and Free III” are just plain perfect, the final gaining momentum in the almost perfectly designed explosion towards the end of the piece, tipped over from the windblown bluffs of “Free II” into the soaring thermal that awaits the continuation in “Free III”. Clearly, the last track “Conversation at the Mózg Club” makes the disc more meaningful and even if you, like me, do not understand Polish, just by following the sound of Przybielski’s and reading between the lines, so to speak, you will glean the meaningful messages of the music that the trumpet plays before, during and after each mini lecture. All round, a fascinating, rewarding disc.