To play his favourite tunes that he has embraced and that have embraced him, the bassist Todd Coolman assembled a trio comprising two fo his favourite ‘collectibles’ Bill Cunliffe on piano and Dennis Mackrel on drums. You might not think of this group, Trifecta, as being a power trip but the three musicians surely sound like old friends getting together to share one of life’s great pleasures, improvising music. And indeed this album, Collectibles is full of passionate moments that maintain these musicians’ love for this music. Coolman keeps things deeply introspective while also letting the songs run on a brisk tempo – along with Dennis Mackrel – and with bluesy runs provided by Cunliffe in typical Cunliffe fashion. So it is possible to enjoy the deadly seriousness of Coolman, Cunliffe and Mackrel keeping the swinging tradition alive as well as be swept away by the joie de vivre of the music. 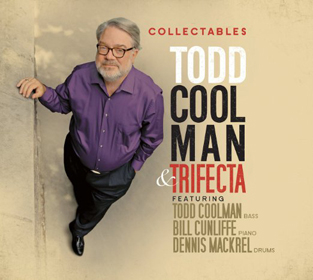 When considering the bass as an instrument in jazz, Todd Coolman’s name doesn’t always come directly to mind and for some it is possible to ignore the fact that Coolman already has three discs as leader under his belt, or even the three Grammy Awards that he has won, but then for others the memory of his stunning turn on the Telarc disc that featured music from James Moody’s 70th birthday celebrations has been permanently seared into the brain. Still almost nothing can prepare you for the masterly manner of his bass playing. Coolman’s tone is somewhat dark and rightly so. It enables him to enunciate notes with great intonation and razor-sharp clarity. On solos such as his gorgeous on one during ‘Jimmy Up, Jimmy Down’ Todd Coolman comes so close the sweet sound of thunder that you want him to go on forever. Each note is absolutely irreplaceable and is played exactly where it should be. Coolan’s waning solo that brings ‘Prelude To A Kiss’ to a close is an example of this.

But for Todd Coolman, it is clearly not about ‘showcasing’ his mastery of the bass; it’s all about the music. And this is what makes this performance so memorable. It’s hard to subjugate instruments in a trio setting. There are, after all, just three of them. Making the energy between them is the key. And here, no matter what mood or shade of piece the trio are negotiating the sum total of the ingenuity of these musicians is in evidence. Melodic lines are tossed lightly from piano to bass and then on to drums. Each musician plays with them as if they were glazing an aria in an operatic score. Try ‘Prelude To A Kiss’ for size. Or let your mind fall prey to the forlorn balletic charm of ‘Isn’t It A Pity’. This album is brimful of such wonderful things and much more. The most difficult thing about listening to it is going to be getting out of its marvellous clutches.

Track List: New Rhumba; We’ll Be Together Tonight; Joshua; With All My Love; Jimmy Up, Jimmy Down; Summer Night; Isn’t It A Pity; Funkallero; Prelude To A Kiss; You’re My Everything; Out Of The Darkness; Three And One; Flatbush.