Home Music Tillery: Tillery
When Becca Stevens, Rebecca Martin and Gretchen Parlato – together, Tillery – break into song, harmonising vocalists disappear and heavenly cherubim and seraphim appear in their place. If you haven’t been to one of their concerts, then here’s proof: Tillery their debut album together. While these ladies may not have invented three-part harmonies, they have certainly taken it to a whole new level. The trio’s compassionate use of words and melodic sweetness, quite simply, adds up to the best recorded work a female vocal trio has produced in years. 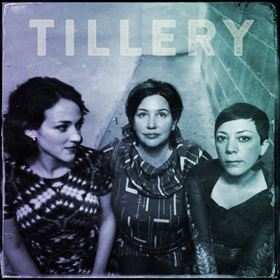 Time and again each of the vocalists – Stevens, Martin and Parlato – shape beguiling melodies into intricately interweaving harmonies. In this perfect atmosphere a sincere piety emerges as the trio caresses the words of songs with balletic vocalastics. Again, all three singular stylists enshrine the language of the lyrics with flawless, though not over-articulated diction. At times, such as in ‘God is in The Details’, the singing is so refined, so curvy that lines appear to swerve through the air as tonal sculptures. Becca Stevens’ melting intensity (‘Take Me With U’) combines with beautifully with Gretchen Parlato’s eloquently transparent soprano (‘Magnus’), and both enter into an interminable dance with the haunting, beckoning, sensual poetics of Rebecca Martin (‘Sweetheart’). The most subtle exchanges are made with conductorless equality suggesting, not so much practiced musical trioism but a supernatural connections between the three vocalists.

By the time you get to ‘Magnus’ you feel convinced that the almost sacred, spatial vocals would be utterly disturbed, but surprise…! Pete Rende’s piano and keyboards bring an extra dimension to Martin’s ‘Gad is in The Details’ and bassist Larry Grenadier together with drummer Mark Guliana change the vocal dynamics of the trio who in turn create a special spaciousness for rhythmic subtlety. ‘I Asked’, a Becca Stevens song that listeners might recall from a recent performance of it by Stevens with Snarky Puppy featured the ladies’ fanciful hand percussion together with the inviting, percussive colourings of Mark Guliana. The emotional urgency of the song’s narrative sounds altogether ravishing in this setting.

‘Tillery’ the song brings this performance to a close, but not before the addition of expressive recitatives culled from the Jane Tyson Clement’s unforgettable poetry of her book of poems, No One Can Stem the Tide: Selected Poems 1931-1991. But in the end it is thanks to three outstanding singers at the very top of their game on Tillery that this album will remain one of the most compelling anthologies of vocal music for a very long time to come.

Track List: Take Me With U; O I Long To Feel Your Arms Around Me; No More; Magnus; God Is In The Details; I Wanna Fly So Free; Sweetheart; I Asked; To Up And Go; Push Me Away; Tillery.