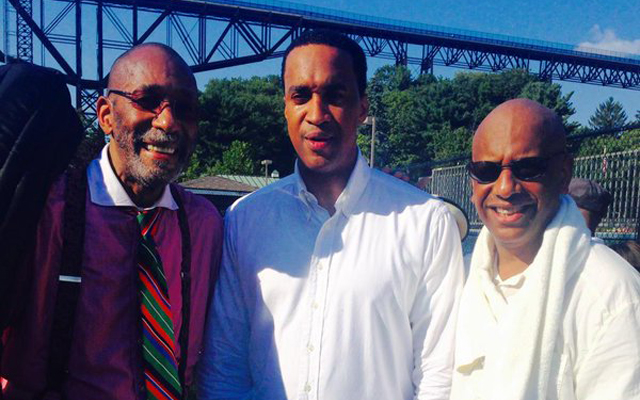 Of all the doyens of jazz performance, the bassist Ron Carter knows no limits to his explorations and now it seems neither do Javon Jackson and Billy Drummond either. Collectively they call themselves Three’s Company and We’ll Be Together Again – to the best of my knowledge – is their first disc together. This is a dazzling recital by three stellar musicians discerningly assembled and held aloft by two great pillars: the ingenious musicianship of the three artists and the brilliance of Chesky’s Binaural recording. Moreover, if one’s reflexive default at the prospect of a trio recording – despite many examples by Paul Bley, Jimmy Giuffre, Bill Evans and Keith Jarrett – is one of dispassionate or nonchalant resistance, this recording is as likely to turn ears as any (trio recording) made. 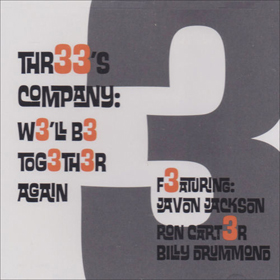 Along the way, in a deftly balanced presentation of strikingly contrasting essays, Jackson, Carter and Drummond offer beautifully turned, reflective and buoyant readings of sui generis ‘concert’ works. Dark Eyes – not normally associated with Jazz – with its exquisite musette-like opening, whose subsequent choruses trip along in a manner that musicians of every shade seem reluctant to pursue, is simply a pearl. Each of the other tracks from then on are almost mystical in nature, yet swing with delight, skilfully preparing the way for the highly distilled, contemplative and widely angular rhythms of Epistrophy. The seasoned reflective qualities of Jackson, as well as Carter and Drummond, heard to such memorable effect throughout are awakened in stunningly voiced combinations of sounds from saxophone, bass and drums.

Great virtuosity and musicianship aside, this is largely down to the judicious alchemy of the musicians’ perception of how architecture and tonal colour can collide to mesmerising effect. Candlelight and Eddie’s Theme are cases in point: the glistening parallel motion (of bass and saxophone), often a bloated gesture when such figurations occur at the hands of other musicians, enticing holds back to set up the richly-textured gravitas that follows. Inexorable momentum here is born of fervent authority, a virtuosity of combined effects without gratuitous excess. Elsewhere, music like Dark Eyes and Danny Boy can often leave the listener cold. But at the hands of these three musicians and with inventive intertwining of lines, this performance will persuade you otherwise in this fragrantly atmospheric music.

It is not only the gripping drama of the music that is breathtaking. This is a very special recording. It comes from Chesky’s Binaural Series. Now while this technology is not proprietary no one has quite mastered it like Chesky Records. This imprint has been in the avant-garde of recorded musical literature for some years now. In the 1980s, when the whole idea of audiophile recordings was relatively young, Chesky was in the forefront with custom equipment such as mixing consoles and the iconic B&W 801 Matrix 2 monitor speakers. That technology has since given way to Binaural technology employed by the label and while the debate about analogue v digital will continue to obsess audiophiles, these Binaural recordings by Chesky will wow lovers of great sound.