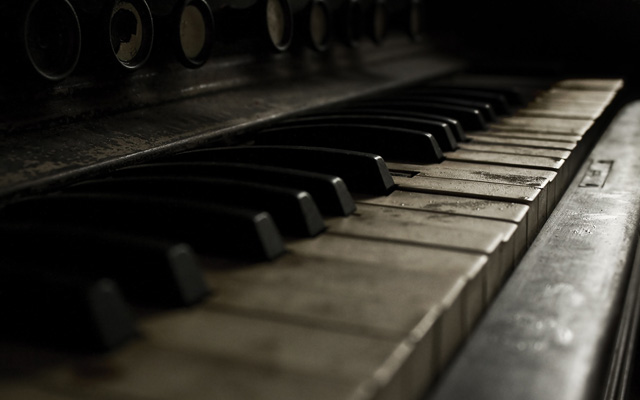 I am not the head of The Magisterium, but if I were, I would canonize George Klabin immediately. He has, indeed long fulfilled the prerequisite for canonization: Three certifiable miracles. By my last count there have been more than twenty. This latest one from his not-for-profit label, Resonance is Groovin’ Hard by The Three Sounds featuring, of course, Gene Harris. Klabin describes the label he founded as “A label with a mission”. And it has never failed to disappoint both in terms of contributing to the Great Library of Jazz. The term has capitalized letters because it is a proper noun-filled epithet. Unlike the depository in the community, the Great Library of Jazz is more like the one Jorge Luis Borges writes about in his book, The Library of Babel (Editorial Sur, 1941) conceived as a universe in the form of a vast library containing all possible 410-page books of a certain format and character set. The Great Library of Jazz would be similar, only populated by a catalogue that one can touch, feel and listen to.

One of the items there is sure to be Groovin’ Hard by The Three Sounds featuring Gene Harris. The album features songs from memorable dates at The Penthouse Club in 1960s’ Seattle, WA, on three separate Thursday night broadcasts over the air (1964, 1966 and 1968) if I have read Jim Wilke’s notes correctly. Wilke (another candidate for canonization) made the broadcasts and even in their shortened versions of hand-picked songs for the single disc, they collectively still make up a substantial, gleaming gem. Of course the spotlight hovers on the pianist, Gene Harris, and although he was ‘high pockets’ at the time, also featured are bassist Andy Simpkins and drummer Bill Dowdy, as well as Kalil Madi and Carl Burnett on tracks recorded in Bill Dowdy’s absence. The booklet notes are laid out in great detail, so there is no need to repeat them here. 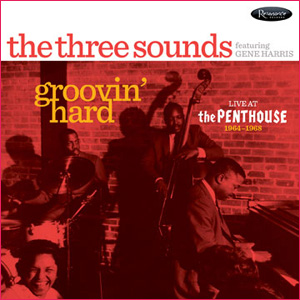 Suffice it to say that this – in all its brevity – is a record to die for. Producer Zev Feldman (canonize him we will, along with), Fran Gala who restored the tapes and, of course Klabin. But what about Gene Harris and The Three Sounds?

Gene Harris’s opening vamp, the familiar chords, rolling octaves, dazzling runs and roaring arpeggios have you mesmerised long before his opening indigo-blue solo on “Girl Talk”. Harris graduated, so to speak, from the same University of the Blues as did Les McCann, and then from the pool of virtuosos that created the great Oscar Peterson, Errol Garner and a handful of other pianists. Like all of the masters he has impeccable sense of rhythm and far from pummeling the keyboard, Gene Harris coaxes his notes into phrases and lines that grow incredibly beautiful melodies. Calling himself “a blues piano player with chops” as he did is only telling a part of the story. His dynamics and expression suggest a lot more and he tends to tell stories in song, much like a stellar player on film and on Broadway. On “Caesar and Cleopatra” Gene Harris becomes, by turns, Claude Rains and Vivien Leigh. His clavé on “The Night Has A Thousand Eyes” and again on “The Shadow Of Your Smile”, aided and abetted by Kalil Madi and Carl Burnett respectively no doubt, are spectacular rhythmic props for him to swirl in and out of his swinging modes.

Everywhere there is evidence of the lyricism and poetry of Gene Harris in long, loping melodic lines, broken up only by a drum figure or a bass line short intermezzo by Andy Simpkins. “Yours Is My Heart Alone” is just one of the examples of this. Dig into the disc a few times and you will find poetic lines and unabashed lyricism. “Bluesette” is clearly the crowning glory of this aspect of his work. And, then, of course, there is the jitterbugging and the rocking and rolling, wild enough to place Gene Harris in a Jook Joint. This too is everywhere, but most especially on “The Boogaloo”. And what can one say about “A.M. Blues”? It’s sensuous waltz-time melody features the majestic sound of Simpkins’ bass intonation, skilled brushwork by Madi and short and long tantalising figures in triplets by Harris. Norman Gimbel and Toots Thielmans’ “Bluesette” is in 2/3 time as well, but it rocks a lot harder at its centre. At the end of it all you absolutely will not have had enough of Gene Harris. Perhaps there will be more where this came from all brought to life again in all its pristine splendour by the saints and miracle workers at Resonance.