This is a glorious disc. Simply glorious. Jonas Knutsson and Thomas Tidholm have long been congenial bedfellows and the two Swedes playing here, on Orsa by Night To start with, there’s the sense of sharing the sheer physical thrill of the duo’s poetry and music. This is particularly evident in the slower, profoundly beautiful movements such as the fierce and brilliant Orsa by Night and the balletic grace of Sorglösa Vals. Common to all is a sense of being fleet but never breathless, with time enough for textures to tell. Both men plumb the depths of their instruments. Jonas Knutsson’s breathing technic has enabled him to explore the texture and tonal colour of notes like no saxophonist playing today and both Thomas Kidholm, in the woody textures of his clarinet and the lilting beauty of his poetry work like a hand in a velvet glove. There is a rare intertwining of musical personalities and the framing of idiomatic music and this makes the disc quite breathtaking. 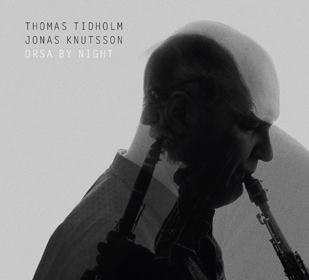 At every turn you get a sense of the two musicians flexing their compositional muscles in these songs that are both original as well as grafted from folksongs. There is of course something innately Swedish about them and even in the mystery of the Swedish poetry but when the instrumental music comes around there is a world view about them. As reeds and woodwinds pieces there is a sense of the musicians’ demonstrating just how much variety they actually introduce to this music. In Mr. Knutsson’s hands as well as in Thomas Tidholm’s the music very much occupies their worlds in terms of mood. Thus there’s a palpable delight in the lyrical rhythmic language of fabulous folksongs and delightful poetry from which the music has been fashioned and the counterpoint is truly exquisite. We are always aware of the interweaving of Swedish music (and improvised music), for instance, as it peeks through the texture in different registers of reappears stood on its head, yet never exaggerated as is sometimes the tendency with less imaginative musicians.

And how the two musicians can dance – at least on saxophone and clarinet – in Polska and Vals – urged into life through subtle dynamics, voicings, articulation and judicious ornamentation. A very different kind of dance reveals itself in Raga efter Grins Hans, an original composition in which the musicians take a more impish view than many, the sonorous drone effect contrasting delightfully with the tripping upper lines. The manner in which the musicians have considered the touch and dynamic of every phrase means that these are performances that constantly impress with fresh details each time you hear them. The musicians gain a sense of intrigue as they re-examine them from every angle, bringing multifarious shadings to the music. And it all flows effortlessly – though I’m sure the journey has been anything but that. Highlights abound: in the murmuring Lillpolskan. The musicians draw you daringly into their world as the legendary sonorities become more and more withdrawn.

This whispered intimacy extends into their insertion of an ornamented version of En Ros Utsprungen, which proves a masterclass in audacious ornamentation, yet never overburdening folk music’s melodic lines. In fact the effect here is truly meditative. Fittingly there are perceived silences within notes and phrases. Are there any caveats? Some might find the basic pulse of the music is perhaps too slow. To me they work precisely because they tease so much music out of each line. The musicians have a rare intensity that draws you ineluctably in without any of the wilfulness that accompanies many Swedish projects. The result is a clear labour of love and one in which the musicians shine new light on old music to mesmerising effect, all of which is captured by a warmly sympathetic recording by Jonas Knutsson and an engaging Swedish poem by Thomas Tidholm, and thankfully, no other booklet notes to take away from anything in the music and the poetry.

About Jonas Knutsson and Thomas Tidholm

”We met at a course teaching the playing of folk tunes on wind instruments in connection with the Hovra Meet in northern Hälsingland. Jonas taught, Thomas was an enthusiastic participant. Something clicked, and after three days of talking and playing we were on stage in Bönhuset (The House of Prayer) – Jonas blew and Thomas read. The year after, we played together in Bönhuset. By then we had both – thanks to Björn Ståbi, host of the Hovra Meet – fallen for the music of Orsa, but Pers Hans from Rättvik who was waiting in the foyer was happy to hear one of his own polskas. Our contact developed, and in 2007 we made a CD with poetry and horns called Himlen Har Inga Hål (Heaven Has No Holes) Read more…