Seth Weaver’s debut album comprises just eight tunes. It is a stepping into the limelight of a musician who is probably just finding his voice – and won’t likely find it until a few more forays into music. But the fact that Mr Weaver has chosen to make his first statement in music a “big band” one entitled Truth is a significant one. First of all even with the possibility of crowd-funding to make a recording it is still a challenge to raise enough money to produce a quality product. Add to that the fact that Mr Weaver had decided to make his maiden venture a big band one. However, courage is not the only quality that Mr Weaver seems to possess in abundance. He has also been able to deliver a fine performance on his chosen instrument, has a remarkable gift for vocals and has also managed to deliver all of his fine arrangements in a big band setting. 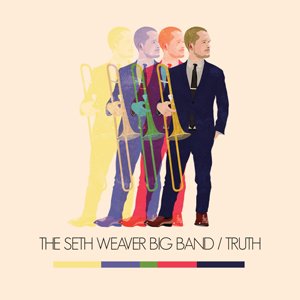 His choice of repertoire is also praiseworthy. Featuring beautifully crafted arrangements of beguiling variety and sensuousness, in every lovingly caressed phrase of Truth Mr Weaver’s music shines brightly. His chosen material is a judicious mix of originals and standards associated primarily with big band music on Broadway and film. Listening to the way in which he seductively bends the notes on “The Hudson” and how he waxes eloquent on the lyric of “Here’s That Rainy Day”, and how other soloists – Oskar Stenmark on “What If”, tenor saxophonist Sam Dillon in “On a Clear Day” and pianist Addison Frei on “The Last Hour of February” or how bassist Marty Kenny crafts his way on “It Could Happen to You” – it is clear that there’s not a single semiquaver that hasn’t been fastidiously considered. All of this could have been achieved in a small ensemble setting. The challenge of doing it in a large ensemble setting is quite remarkable. Also notable is the fact that this music is extraordinarily danceable. And here’s why:

For many people it is possible to listen to the music of Duke Ellington [or Count Basie or John Kirby] – a version of “East St. Louis Toodle-Oo” released on Vocalion Records in 1926 [for example] – only to divorce the fact that is historic from the fact that we are enjoying and dancing to it even today, almost 96 years after it was first released. Among the reasons why it is an almost guilty pleasure is the fact that for many of us “nostalgia” – that feeling of wistful affection for the past – has become something negative. “Old stuff” and “moldy-fig” are not uncommon expressions among the general music population who seem to be swept up in almost everything that came after Jimi Hendrix at Woodstock and Miles Davis’ “Electric Period”. But the music of Duke Ellington, Count Basie and John Kirby’s big bands was “high art” that you could dance to and that – even though we often forget – is why big bands still have relevance today. And this may ultimately be the best reason to listen to and enjoy this music by Seth Weaver.