One of the most compelling aspects of human existence is the ceaseless quest for meaning and some artists like Oliver Lake, Graham Haynes, Joe Fonda and Barry Altschul, collectively The OGJB Quartet, – all of whom to a man, are born, not made – embody this questing impulse much more than others. Theirs is a music that pokes and probes are the diaphanous fabric of the sonic world, forever looking to penetrate its mysteries. They know that just as musicians such as Beethoven once said, (you) “Don’t only practice your art, but force your way into its secrets, for it and knowledge can raise men to The Divine”. Bamako, is, of course, the latest stop on this musical quest. 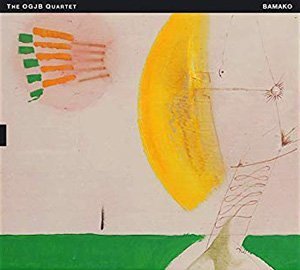 The album takes its title from the song of the same name; which, in turn is the capital of Mali, but Graham Haynes’ chart is also a metaphor, one that thrusts the sound world of this repertoire into the world of the great Songhay Empire of griots and griottes; the world that produced one of the greatest of epics: The Epic of Askia Mohammed. On the version of “Bamako” featured here, however, we find a poem by saxophonist Oliver Lake; one that he recites while Mr Haynes also plays the traditional (stringed harp-like) dousn’gouni, and where Mr Altschul double-tracks on another traditional African instrument the mbira (a popular, but rather erroneously-named “thumb-piano”). The effect is stunning; a collision between the sound of one of the world’s oldest civilisations and one of the most contemporary, with Mr Lake’s recitation embodying the culmination of a one of the longest and most painful migrations.

The song follows Joe Fonda’s rendering of a dissertation by Dr. Cornel West, the radical American philosopher, political activist, social critic, author, and public intellectual. “Bamako” comes with its diaphanous and lyrical calming harmonic winds after the rich and solemn sonorities of “Listen to Dr. Cornel West”, which is couched in anger; an outburst of harmonic and rhythmic entanglement a musical rendering of the state of society in which this music hyperventilates and sobs in a proverbial catharsis that melts into “Bamako”. But if, first we hear a wistful melodic sojourn, we also hear resolution and joy – all elements in The Blues as the musicians move trace the essential emotional elements in music that lead from the melancholic to the hopeful – and the joyful.

We can discern all of this as the music that follows moves from slow tempi to fast; even boisterous contrast. Here the soft and simple melodic movements incorporate echoes of dances and fanfares. By actively throwing overboard melodic, structural and harmonic hooks that have become expressively blunted through overuse in the especially in the contemporary setting, the music that follows from “Be Our S’Cool” to the two group mnemonics “OGJB # 1 and # 2” build new structures and musical stories from what might technically and expressively – or might not – be left. This instinctive radicalism in built into the improvisations exchanged between the players in this ensemble makes for some vivid and edifying, viscerally exciting and truly memorable music.