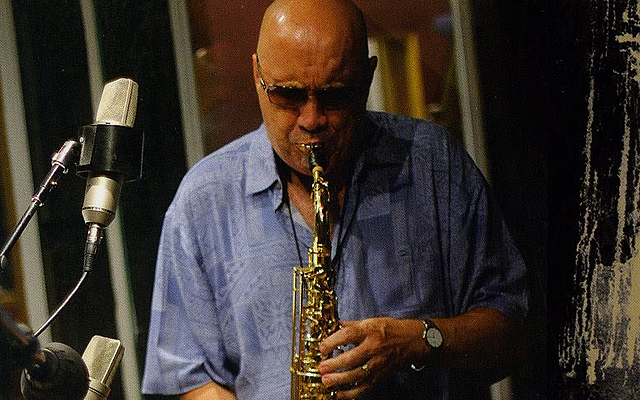 In making artistic homage the theme of his record Dedication Steve Slagle shows not only how proficiently he can play in a variety of styles, but the depth of his appreciation of art is. He also shows how far he is willing to go to display his own art in each of these nine extraordinary compositions, each of which displays a profound knowledge of the musical topography that he traverses, which includes the Blues and Jazz, and in his take on Brasil and Latin America, with two wonderful songs that drinks from the well of the music of those cultures.

In “Triste Beleza”, for instance, Mr. Slagle has written what ought to be considered a song in which form, narrative and emotion work are woven one into the other and the third so flawlessly that only a Brasilian could have captured that evanescent emotion of “saudade” 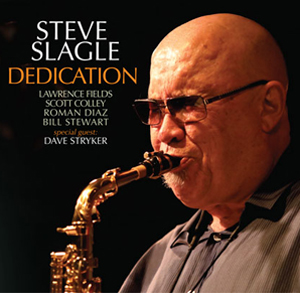 more perfectly and that too without having to use words evocative of that feeling of elemental loss. This is a narrative triumph which incidentally is wonderfully executed in performance with dazzling runs, breathtaking arpeggios and liquid glissandos.

Later, on Dave Stryker’s “Corazon”, he not only acknowledges that it is a composition “in a perfect key for alto” but he turns the piece into the equivalent of an instrumental aria. Mr. Stryker’s performance here is a fascinating example of his vocal style. And while it is true that essentially almost every instrumentalist endeavors to express music as if in emulation the human voice, few succeed like Mr. Slagle does, with his sinuous, yet in his singularly seductive virtually “singing” manner throughout t his album.

In other material, of course, such as the radiance of “Sun Song”, “Opener” and the meditative “Charcoal Blues” the saxophonist translates his experience of Black American music into a deeply-felt one. “Watching Over” captures the wondrous colour and momentum of Marc Chagall’s unique work with graceful movement and tone-colours that make it truly “many-splendoured”. And in the gleaming, buttery melody of “Sofi” is the epitome of what a perfect ballad ought to be.

Mr. Stryker has also, once again, picked a group of musicians born to play this repertoire. Lawrence Fields is brilliant as he shows that more than a “harmonic” spectator, he is a direct participant in the musical and emotional process. The same can be said of the inimitable bassist Scott Colley and drummer Bill Stewart, both of whom are exquisitely tender on “Sofi”.

Román Díaz is equally wondrous outside his Afro-Cuban musical realm; indeed he brings the visceral excitement and vibrant Caribbean colour and texture to the “Sun Song” and Dave Stryker’s solo on “Charcoal Blues” is sensational. Both musicians also play on several other charts and bring interesting dimensions to each with breathtaking performances of their own.

Add to all of this is superb engineering by Chris Shulit and you have a faultless musical package from Steve Slagle.