Home Music Steve Coleman’s Natal Eclipse: Morphogenesis
Two things happened to Black American music before and after ‘Jazz’ – or ‘Jass’, the music that Jelly Roll Morton once brazenly took credit for ‘inventing’ – came to pass. First: the music happened – from ragtime and swing to bebop and the music of the avant-garde; and it begat a continuum. To complement and codify the insanely beautiful music from Louis Armstrong and Eubie Blake, to Charlie Parker and Dizzy Gillespie and Thelonious Monk and Bud Powell, and a handful of others continuing on to Muhal Richard Abrams, Anthony Braxton, Henry Threadgill and others… and second: attempts were made to systematize these black codes.

First by George Russell with his (1953) Lydian Chromatic Concept of Tonal Organization, then (1957) Gunther Schuller and his (coining of the term) Third-Stream while giving a lecture at Brandeis University, to describe a musical genre that is a synthesis of classical music and Jazz. Meanwhile, The Music was happening, inside the ever-widening arc of its continuum. Until, that is, Steve Coleman fell into his time-warp’ to bring forth his mBase Concept, short for ‘macro-basic array of structured extemporization’.

The acronym coined by Steve Coleman describes a living, breathing, morphing system that encompasses the intellect and intuition, the synapses and very breath of the individual musician whose instruments became human appendages as the music was formed. Morphogenesis is the greatest creation to emerge out of that mBase Concept system. Its perfection is born of the morphing of Jazz Hot and Cool, everything from counterpoint to chromatics and tone rows, numeral and alphabet ciphers, venn diagrams. 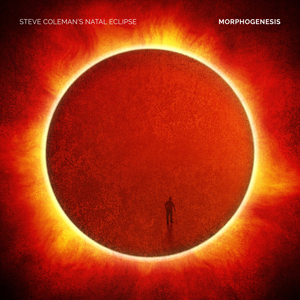 Here’s how Steve Coleman manages to pull this off: every intellectual and intuitive faculty, voluntary and involuntary reaction is somehow channelled into the inner rhythm of a boxer. It’s not just any boxer, but a romantic amalgam of the everyone from The Great White Hope to The Greatest.

Not so ironically, this music succeeds because it rhythmically profound – something that is unique in all music to Black American music. But also, and might be seen by some as wholly ironic, the music of Morphogenesis transcends musical style, to become (an) art-form of human posture and movement, pure dance and near-pure energy because it is driven by the same force of nature that propelled the human being into the arena of life itself. In this, it is not suggestive of ‘anything abstract’; just something profound and melodically round as if to mimic the dance that has – in all its complex simplicity – become the ‘circular dance of life’.

In music entitled “Pull Counter” and “Roll Under and Angles” musicians shadow each other, block and parry; until later in “Shoulder Roll” and “Dancing and Jabbing” alto saxophone and trumpet, tenor saxophone and clarinet, piano, bass, drums and percussion all subscribe to the same powerful tonal and textural musical organization that encompasses the mythical, the heroic and the human locked in an interminable dace of unfolding destiny. And together with the musical commentary of “NOH”, SPAN” and “Horda” (which Steve Coleman unmasks in his notes) this completes a fascinating set of works. On paper this sounds impenetrable but in performance it nevertheless carries a powerful physical weight that transcends narrative clarity.