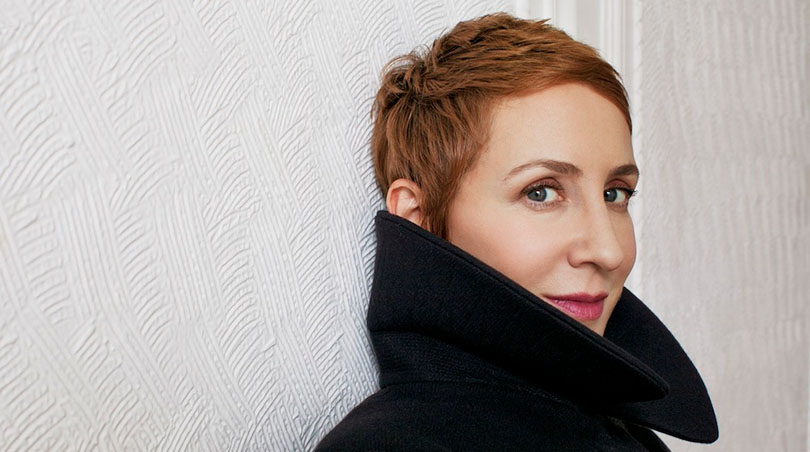 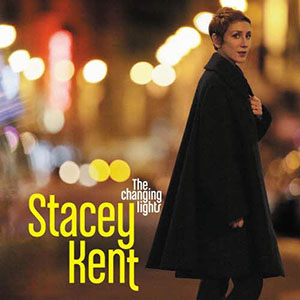 There are few vocalists who can sing with such fragrant lyricism as Stacey Kent. The fact that she can sing in several languages—and make them her own—is something many singers do, but few do as well as she does. Moreover, few can capture the essence of the idiom of that language as Ms. Kent can. The manner in which she immerses herself in “A Tarde” and “Chanson Légère” is absolutely superb. She does all this and more on The Changing Lights, an album that is neither wholly English, not wholly French, but almost wholly Brasilian, a gorgeous album where several cultures collide, in the classical sense; and one that defines, as a matter of fact, all that is best about Brasilian music today. In fact this album is wholly reminiscent of the finest work that the great Antonio Carlos Jobim did at the height of his powers. It is clear, therefore, that Ms. Kent dreams in Portuguese, and Mr. Jobim did; but she interprets these “dreams” in her own singular manner and in a voice so perfect that she makes each song a miniature aria unto itself. And there is something else: she is aided and abetted by saxophonist, Jim Tomlinson, who conjures up Stan Getz at his poetic best. This is, however, elementally different from Astrüd Gilberto and Stan Getz. Mr. Getz and Ms. Gilberto were romantic strangers who came across each other; Ms. Kent and Mr. Tomlinson are lovers entranced by each other. And before long they are in each other’s arms, musically speaking.

Stacey Kent inhabits her music and music inhabits her as if by magic. The songs come from somewhere so deep inside of her and they course through her body, emerging from her lips eventually. Along the way they possess her lithe frame. She sways sensuously as she sings. The lines undulate in a fluttering manner and they are woven into each other as if they are gossamer. The result is that the song becomes an enchanted translucent, diaphanous tapestry that glimmers in the air above her smiling face. Ms. Kent sometimes sounds so vulnerable that the listener feels an irresistible urge to rush to her rescue. However, up pops Mr. Tomlinson at that very moment to gently pry the lyricism, to open the strings of her heart and play a pick-up line that is absolutely beautiful and alluring. The saxophonist has a fine sense of timing. On “This Happy Madness” he slides in with devastating, almost rakish charm and all but devours the lyric of the song. His appetite for sensuality is equally wholesome and it seems to match Ms. Kent’s with equal charm and teasing splendour on “Waiter, Oh Waiter.” Here is a song with an exquisite storyline of lovers so entranced by each other that they are lost in the memories of their recent affair that they are almost childishly oblivious of reality. Mr. Tomlinson’s solo is hauntingly beautiful. Guitarist John Parricelli`s guitar throughout.

And there also lies the rub. A major element in the beauty of this recording is the manner in which bass and drums intertwine with guitar and how they all swirl around the saxophonist. This is an extremely well-knit group, in any configuration. And all of the players seem to each other. Eschewing the mundane this band makes every note count, just as Mr. Tomlinson does in “How Insensitive,” just as pianist Graham Harvey does too; just as the guitarist John Parricelli is even in the most unguarded moments of songs such as “The Changing Lights.” And then there is that superb song, “O Barquinho (My Little Boat)” where the magnificent Roberto Menescal graces the song, making it one of the crowning moments of this extraordinary album. There is a quiet strength in this chart that mirrors the unobtrusive métier that comes from the musical sure-footedness with which Stacey Kent skips through the challenges of The Changing Lights.

An American language student moves to Europe to study French, Italian and German for a Masters degree in comparative literature. Her life takes an unexpected twist that sees Stacey Kent become one of the world’s foremost jazz singers.

Stacey, who joined the Blue Note (EMI) roster of recording artists in 2007, now boasts eight best-selling albums, including the Grammy nominated, Platinum-selling, BREAKFAST ON THE MORNING TRAM (2007), THE BOY NEXT DOOR (2003) and RACONTE-MOI (2010), both of which achieved Gold status, a string of awards, including the 2001 British Jazz Award, the 2002 BBC Jazz Award for ‘Best Vocalist,’ the 2004 Backstage Bistro Award for best live performance, the 2006 “Album of the Year” Award for Jim Tomlinson’s album, THE LYRIC, as well as a fan base that enables her to sell out concert halls around the world. Stacey’s Blue Note release, BREAKFAST ON THE MORNING TRAM, features four original songs, including the title track, written especially for her by Jim Tomlinson and acclaimed novelist, Kazuo Ishiguro. Since its release in September 2007, it has been released worldwide in 38 countries. The album remained at the top of the French jazz chart as well as holding its own in the top 20 of the general album charts for over a year and saw Stacey and the band tour in 27 different countries in 14 months. Stacey’s next release, RACONTE-MOI, also featuring songs written especially for her, mixed with classic French chansons, went on to become the second best-selling French language album worldwide (outside of France), in 2010.
Stacey also went on to receive the CHEVALIER DANS L’ORDRE DES ARTS ET DES LETTRES, awarded to her by the French Culture of Minister.

The twist of fate that took her life in this new direction was a chance meeting in Oxford with saxophonist, Jim Tomlinson. Like Stacey, Jim was embarked on an academic path, but their meeting sparked in each other the desire to pursue their love of music together. After a year’s study at the Guildhall School of Music, Stacey received immediate attention and recognition on the London scene in the company of, now husband, Jim Tomlinson. A demo tape, sent simultaneously to Polygram Records, Candid Records and broadcaster, Humphrey Lyttelton, secured her a role in Ian McKellen’s film version of RICHARD III, a recording contract and national airplay and endorsement from Britain’s most respected jazz broadcaster. Since the release of Stacey’s first album, CLOSE YOUR EYES (1997), she has achieved, without compromise, both critical and popular success, with her fresh and heart-felt interpretations of the finest love songs of the twentieth century. But it was a feature on CBS SUNDAY MORNING in 1999 that gave Stacey national exposure in the USA and brought her to wider recognition. Since then, her career has continued to expand internationally, with Stacey traveling worldwide to concert halls from Taipei’s Chiang Kai-shek Concert Hall to Carnegie Hall to the famed Olympia in Paris.

Stacey’s admirers are not limited to the loyal fans that buy her albums and pack out her concerts. Best-selling crime writer, John Harvey, has Stacey sing, if only fictionally, in his latest novel, Still Water. A track from her third album, LET YOURSELF GO, was selected by Kazuo Ishiguro, on his appearance on DESERT ISLAND DISCS on BBC Radio. It was this event that led Kent, Ishiguro and Tomlinson to the songwriting collaboration that features regularly in their work. Clint Eastwood invited Stacey to sing at his 70th birthday party, Michael Parkinson invited Stacey to sing on his television show, as did Sir David Frost, who asked her to join him one Sunday morning, to sing a song and review the morning papers with him on “Breakast with Frost” and Aerosmith’s Steven Tyler, in a recent interview, listed Stacey, alongside Willie Nelson, as being among his favourite singers.