Home Music Spontaneous Music Orchestra: Search & Reflect
In its elemental melding together of brass, winds, strings and the human voice – sometimes sans percussion – the Spontaneous Music Ensemble and its larger Orchestra configuration suggests exploring the possibility of creating a monumental, pulseless music made up of amorphous masses of seemingly static, but subtly changing, textures whose component parts flow seamlessly in and out of each other. This musical mission also seems to have continued from the mid-1970’s to the turn of the century; at least that is clearly discernable from Search & Reflect, a long (almost two-and-a-half hour volume of music broken up into two discs, recorded and released at three points in time by Martin Davidson’s EMANEM Records – on LP and CD.

Whether we are privy to the 1975 performance at St John’s Smith Square recording (1975), or at Notre Dame Hall (1981), or at London-area concerts (1973); and whether we are listening to the vast swathe of music on “In Relationship to Silence”, or the spectacularly textured, albeit shorter, version of “Sustained Piece”; and certainly on the colossal “Plus Equals” by the stripped down version of the Spontaneous Music Ensemble, the music is equally spectacular. Sometimes beginning proceedings with a vast chord covering multiple octaves and registers played by brass, wind and string instruments 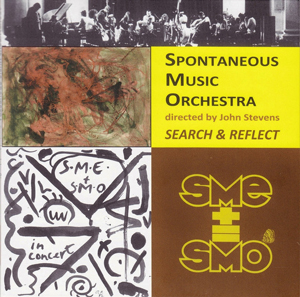 and at other times simply arriving in the form of an amorphous ocean of sound lapping over the lip of the stage and gradually building in force and intensity, the music is overwhelming and beautiful.

We are reminded, on the rhythmic advance of “One-Two” for instance, of something evocative of a great wheezing organ or, elsewhere, of a swarm of demented bees. Texture is everything: while there is a sort of sonic undulation from time to time, there are no real silences, instead the music is punctuated by a series of enormous crescendos. “Plus Equals”, from twenty-five years before anything else here is just like the rest of the repertoire here but the overall effect of this piece feels very different . On this occasion the clusters – chords and phrases made up of closely adjacent notes, played and wailed or sung, are built up in gradually overlapping layers in a wondrous sonic architecture.

There is still a sense of sculpted sound but the combination of instrumental timbres is often radiantly beautiful, suggesting bejeweled and glowing. And as always, it is John Stevens who is a masterful steward of proceedings and conducts from the front with sublime control and flawless distinction.

Track list – Disc One – A1: In Relationship to Silence; A2: Sustained Piece (Instrumental); A3: Sustained Piece (Vocal); A4: One-Two; A5: Mouthpiece. Disc Two – B1: Plus Equals – Search & Reflect, Sustained Plus, Free Improvisation; B2: Triangle; B3: (A fragment of) Static