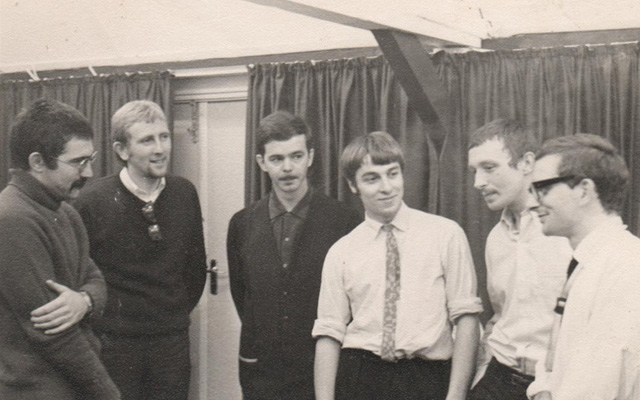 Having previously discovered music of the Spontaneous Music Ensemble (SME) aficionados of improvised music will be delighted to discover that the vitality and sense of freedom they bring to this 1966 recording even fifty years later. Preserved in it are not only the qualities of remarkable invention in the early days of what was then the avant-garde, but also an intense expressiveness to the movements of these three extended pieces. There is also airy style not confined only to the purportedly slower movements of the surreal ‘Seeing Sounds & Hearing Colours’. This, along with imagining in detail how to bring out the individuality of each of the pieces results in performances that compel the attention and, in the quicker and more daring movements, the wit and imagination of the improvising players. 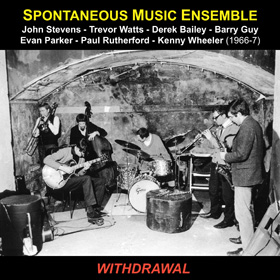 In each of the three pieces – ‘Withdrawal Soundtrack’, ‘Withdrawal’ and ‘Seeing Sounds & Hearing Colours’ – the playing is excitingly fiery (especially in Part 2 of the ‘Withdrawal Soundtrack’). This is also true in some measure or the other, in the entire repertoire, when each of the featured musicians find vivacious partners in each other as their parts are most imaginatively played and the controlled brilliance of the ensemble passages leave a lasting impression seared into the memory. The most identifiable aspect of any music played by the SME provide lively support to each other while still making for a certain looseness that is ever so attractive to this set. Soli by every musician is especially beckoning as they conjure some surprising, visceral sounds from their respective instruments, ratcheting up the tension with ferbrile, nervy forays that glue together the ensemble parts.

As an ensemble the SME provide wonderful means for contributors to enter into finely balanced dialogues with one another – always finely balanced and expressive, and creating conditions for the necessary elements of drama and emotional colour. For all of these reasons and more this iconic disc plays an important role not only in the discography of the SME, but in the history of both European improvised music, which indubitably created a lasting impact on American improvised music as well. As always the music of this group is elegant, stylish and played throughout with impressive tone, individuality and fantasy. Each musician, for his part, plays the role of dramatic protagonist to perfection; each is a powerful presence who plays with heroic tone.

Together the Spontaneous Music Ensemble provides a scintillating account of improvised music with just that touch of danger, bold enough in its freedom to make it attractive and enduring.