There is no guitarist living or dead who plays or has played with such beauty and savage power as Sonny Sharrock, except perhaps Jimi Hendrix in his heyday. Moreover this disc, Ask The Ages which was produced by Bill Laswell – originally on the Axiom imprint in 1991 – has been re-mastered by Michael Fossenkemper and release on the MOD Technologies imprint. For the uninitiated Ask The Ages stars not only Mr. Sharrock, but Pharoah Sanders, Elvin Jones Charnett Moffett. It is, to mind the finest album to come out of the new label founded by intrepid partners Giacomo Bruzzo and Bill Laswell unfolding Sonny Sharrock’s most fiery music. Abetted by the uncommonly articulate visceral playing Mr Sanders, Mr Jones and Mr Moffett the performance of these screaming pieces evinces a glowing dedication to the blues of the ancestors, remarkable luminosity of texture, soulful rapture and emotional clout that mark it out as the frontrunner alongside the recordings of Jimi Hendrix. 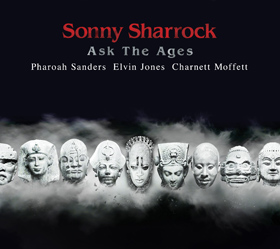 In the opening wildness of Promises Kept, Sonny Sharrock’s enviably lucid conception distils both slumbering organic power and piercing heartache to the manor born, while the elegiac solos during What Does She Hope To Be, Little Rock and As We Used To Sing really do bring a lump in the throat. The winding soli will make you sit up, such as the muscular vigour and fiery snap of show; like Hendrix before him Mr Sharrock is memorably appreciative of the folk and classic blues in the brilliante marking for the saxophone, bass and drums in the quartet section of those pieces and no partnership of musicians (except John Coltrane’s classic quartet or Charles Mingus’s trinity of Mr Mingus, Danny Richmond and Jaki Byard) has equalled his (Sonny Sharrock’s throbbing guitar mastery in the magical Many Mansions and Once Upon A Time. That finale has been superbly handled; that astounding unison cry to the powers that be projects with searing intensity, and those giddily eloquent measures in the songs mentioned leading up to the towering climax are truly are truly sostenuto.

The couplings – Mr. Sanders with Sonny Sharrock and Elvin Jones with Mr Moffett as well as Mr Sharrock with the latter two yield comparable reward. I am especially taken by Sonny Sharrock’s thrillingly ardent and bracingly characterful way with his guitar on Little Rock, both here and in the remarkably bluesy Promises Kept, which also enjoys subtly observant pliable and profoundly moving treatment, as this quartet cover themselves in glory. An exhilaratingly crisp, yet wonderfully raw Once Upon A Time rounds off proceedings with aplomb. Two separate venues were employed (for the original recording) but the sound consistently displays commendable warmth, depth and antiphonal spread. This is, quite simply a marvellous disc.

Track List: Promises Kept; Who Does She Hope To Be; Little Rock; As We Used To Sing; Many Mansions; Once Upon A Time.

Warren Harding “Sonny” Sharrock (August 27, 1940 – May 26, 1994) was an American jazz guitarist. He was once married to singer Linda Sharrock, with whom he sometimes recorded and performed. One of few guitarists in the first wave of free jazz in the 1960s, Sharrock was known for his incisive, heavily chorded attack, his highly amplified bursts of wild feedback, and for his use of saxophone-like lines played loudly on guitar. Read more…