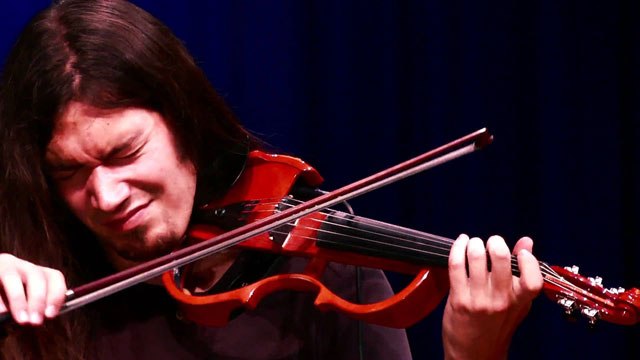 Simon Frick is a wild, untameable artist, enterprising like no one else—especially when some of the leading artists of his ilk, who are so content to stick with the familiar. Perhaps his association with David Helbock has something to do with it, or perhaps some of the other “out there” artists with whom he has musical associations. But I suspect that he is his own man with a wild, untameable voice and the interminable dances with wolves that he seems to indulge in on his magnificent disc simply entitled Solo. On it are some pieces freshly imagined by Mr. Frick, who traverses the turbulent musical seas that surround them. Mr. Frick opens his explosive programme with the gnarly figurations of Cobain/Grohl/Novoselic “Smells Like Teen Spirit” which pushes the repertoire into a realm that is so far-removed from the straight-laced fare that violinists seem to favour these days that it might come as a shock to the more complacent listener. Equally shocking is the fact that Simon Frick can also be tender. However I prefer the more elusive harmonic sleights of hand that fly off his strings with rhetorical insights and sophisticated rubato with which Simon Frick announces his bass-heavy transversal Teutonic splendour. 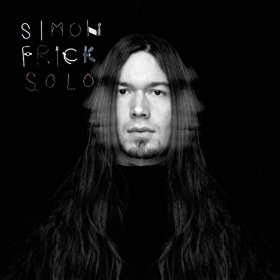 Simon Frick is a violinist with a baroque bent of mind. His are the brilliant, melismatic trills, the upwardly curling arpeggios that startle with their rare poignancy. His is music that glistens and shimmers in transcendent melodic genius. It is music that simply dazzles unlike many a lesser virtuoso. His dark allusions revel in shifting pulses that have a real, albeit unconventional urgency about them. Sometimes Mr. Frick can play with a capricious delicacy that is simply heart stopping, as is the case on “In The Name of God”, which he ends as he began, with a tempo that has gravitas (not to be confused with heaviness), the effect of which is granitic, magisterial. His other original compositions are treasurable too, though—of course—you have to take them on their own terms. What Mr. Frick does with slow movements, gives them a kind of operatic reach and breadth, though never does it lapse into histrionics. And in the end, he always brings out the main themes’ stuttering quality superbly, lending the music not just a mercurial quality, but a dramatic one too. And his phrasing is quite iridescent in its range.

With “Nachtlied” the haunting repetitions in violinist vocalisations are the high-point, the rest relying on a restricted repertoire of brittle and ferbrile effects. His electronic elaborations have a remarkable on this music. In the end it is the verve and economy of the he overall design of the music that makes this the most satisfying of all the pieces included in this album. The booklet notes have poignant brevity to them. And they manage to convey the painstaking search for the perfect recording. This is also something that adds to the mystery that is Simon Frick. However, therein lies the attraction to the violinist’s ingenuity. Perhaps this is what also gives this album its edge over many other recent violin recordings; it’s not just the daring repertoire after all, but the whole package that makes this a desirable album.

Simon Frick was born in 1983 in Bludenz (A) and studied classical violin under Josef Sabaini and Werner Neugebauer as well as jazz and improvised music under Andreas Schreiber at the “Anton Bruckner Privatuniversität” in Linz. In and beyond his studies he also dealt intensely with other styles like rock, experimental, free and contemporary music. In addition he got lessons from Christoph Cech, Peter Madsen, Peter Herbert, Harry Sokal, Alan Praskin,… Read more…