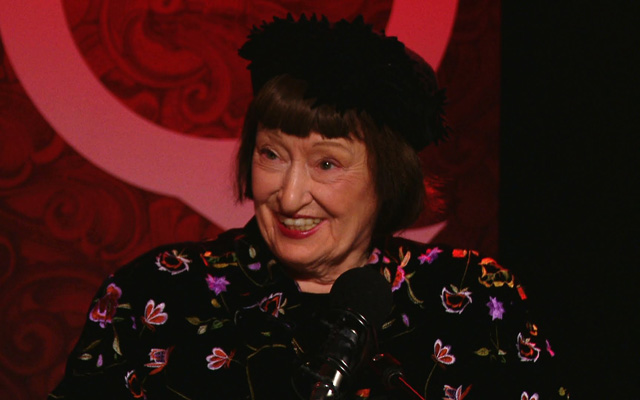 There is no limit to the wonderful things you can say about a Sheila Jordan performance. It’s just that you get tongue-tied when you have to say them. Sheila Jordan is one-of-a-kind. She is a rare and gleaming gem that you find once in a lifetime; something to cherish and be selfish about because you do not want to share her with anyone. Jordan is a storyteller like no other. She is an evangelist and her gospel is jazz – bebop to be precise. And yet, despite this you know that somehow she would be equally at ease with Schumann lieder as she is with Birdsong. (Yes she is that great and versatile a voice artist). She worships at the altar of creativity in a voice that is at once childlike and erudite. She is, quite simply, the last of the great singers of a generation that has gone by with the passing of Abbey Lincoln. But like Lincoln, you just know that she will live forever. 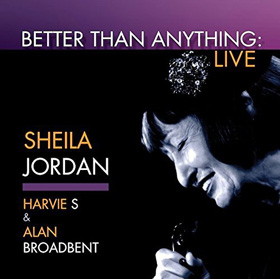 Better Than Anything: Live is a performance that was actually recorded in 1991at Kimball’s East in Oakland. It is a longish programme, beautiful in every way, well recorded and featuring two of the finest musicians you could ask for. On bass there is Harvie S and on piano another great: Alan Broadbent. This was pre-Cameron Brown days (Jordan’s first live performance with the bassist who is probably her lifetime musical partner) which began in 1997. And Alan Broadbent sits in for Steve Kuhn, her regular pianist since the 1960s. Harvie S was a musical partner for quite a while and he plays with beautiful, plump notes that dance all over Jordan’s voice like a gazelles at play. And Jordan gives him ample space to dance. In fact they also dance together, waxing eloquent across the ocean of music that Jordan creates on the fly. Broadbent follows like a jealous lover sometimes patting Harvie S on the shoulder and taking over as Jordan’s dancing partner.

And what can you say about Sheila Jordan that has not been said a million times before. She is the best of Jazz’s deep song vocalists. She is Jazz’s great griot. History flows through the lyrics of her songs. Sometimes she sings songs that many singers have sung before her. However, you feel as if you’ve never heard them before. She surprises you with dramatic twists and turns in even the simplest of lines and verses – as she does in ‘Better Than Anything’. She can make you laugh with her puckishness and flirting as she does in “If I Had You’ even though the lyrics are dead-serious. You want more puckish, well you got it. Listen to her duet with Harvie S on ‘Falling In Love With Love’. And she can make you weep with her heart-stopping version of Irving Berlin’s ‘What’ll I Do’, with which she ends her beautiful medley. “Stop! Please stop,” you want to say. Not because you’ve had enough but because you are awash with emotion, drained in a beautiful, hair-raising way.

Of course, Jordan goes on, because she must preach. Her sermon almost always begins with a Charlie Parker tune. You are gobsmacked no matter how many times you may have heard her sing ‘Confirmation’ for instance. But you are still speechless. And you want to cry. She scats as if her heart and tongue are directly connected, or at least as if the nerves of each organ. She teaches this method, if you can call it that, at master classes, but to this day I have never heard anyone scat with such brilliance and freshness except perhaps Betty Carter. And just when you think you’ve heard enough and you want to scoot, Jordan comes up with ‘Waltz For Debby’. So what can you say about a Sheila Jordan performance? Nothing, because you are absolutely dumbstruck… And all you can think about as you leave the venue, or change the record is: Long Live Sheila Jordan; long live Jazz.

Track List: Better Than Anything; If I Had You; The Best Thing For You; I Concentrate On You; Medley: You’d Be So Nice To Come Home To, Mourning Song, Japanese Dream, What’ll I Do; Confirmation; Waltz For Debby; Falling In Love With Love; The Caterpillar Song.