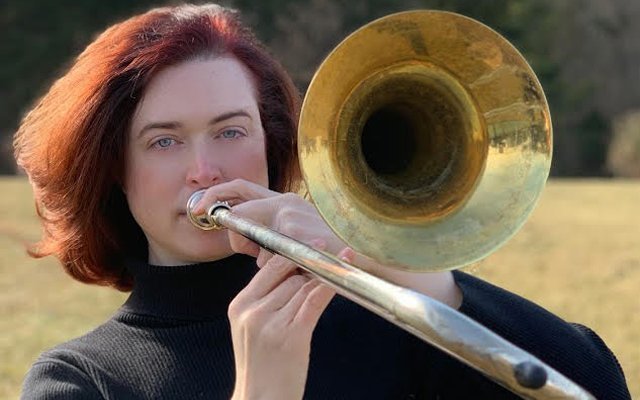 The young trombonist Shannon Gunn is making the argument that, as I too believe, all responsible artists ought to be making and that is: when it comes to the violation of human rights social responsibility is not an option. Magically, she is doing it not simply with candour, but also with considerable artistry. Appropriately, therefore (or perhaps, not so appropriately) her album is entitled Gunn’s Ablazin’; not so appropriately, only because while the not-so-hidden narratives of many of the songs is related to what is front and centre as a direct result of the reactionary government of President Trump and the disturbance that it has caused in civili8sed society. 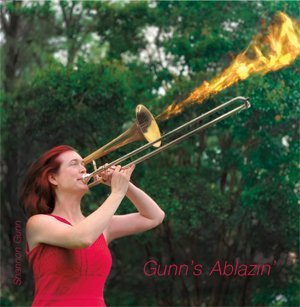 It is a courageous artistic step especially for a woman musician in a society as divided along political and gender lines as contemporary (not just American) society is today. But what is creditable is that Miss Gunn has managed to create music that is melodically, harmonically and rhythmically accessible even as it incorporates harmonic devices that are dissonant and on distortions and rhythmic ones that are based on principles of arrhythmia. Her approach is novel – unlike the Jazz avant-garde musicians of the 1960’s such as Roswell Rudd, Grachan Moncur III, for instance. In Miss Gunn’s case she achieves this with her quintet principally by employing the use of the metallic, wafting, glassy and oscillating, drifting and ethereal voice of the vibraphone, and the mindful tintinnabulation of the Fender Rhodes in the other group configuration; both of which instrumental relationship(s) is set against the rumbling, gruff smears and bellows of her trombone, glued together with rolling bass lines and the rattle and hum of drums.

This disturbing synesthesia; this sensation produced in one modality when a stimulus is applied to another modality, best induces the hearing of certain sounds and the visualization of a disturbing imagery and color in “Babes in Cages are Not Okay”. It is a song that was written as a reaction to the cruel imprisoning of children and babies by Trump’s US Immigration and Customs Enforcements, which is reminiscent of the Japanese, Nazi, Soviet and other ethnic pogroms in Fascist countries. Miss Gunn’s is not an unnecessarily strident voice. But as a trombonist she makes music that is profoundly mournful and this makes her “protest” particularly poignant. Protest is a theme not only in that particular piece, but also on “Orange Noise” and “#canigetpaid” – the former work being directly “Trumpian” while the latter is a complaint at how artists in general are being treated today.

As always, though, melodic, harmonic and rhythmic invention – and not only melancholy – is at the heart of Miss Gunn’s work. She also makes clever reference to music by Chick Corea and Joe Henderson as she rings in the harmonic changes in “#canigetpaid” and “Cruash” – (something that I’ll leave listeners to find out how) find with harmonic and rhythmic references that are angular, and smartly appropriately “well hidden”. Above all there is a wonderful “song-like” quality about this music. Moreover the musicians of both the organ trio and the quintet operate – even with Miss Gunn as the protagonist – as a partnership of equals. Every instrument is integrated not simply musically, but also philosophically in the same spirit of the trombone.

The absence of extraneous effects – such as electronics, which I believe would be tempting for many musicians – has been, mercifully, avoided. The result is attractive earworms rather than distracting devices and gestures, as well as dancing melodies, insistent rhythms and wonderfully satisfying harmonies all of add the element of unusual textures (such as the Fender Rhodes with everything else) by Hope Udobi with Miss Gunn’s trombone with the Firebird Trio, especially on “Carried Away” and “Gymnopedie #1” as also is Garrett Gleason’s guitar on songs such as “Cruash”. All of this heralds the arrival of Miss Gunn as an attractive new voice on the trombone, an instrument that is diabolically difficult to play with distinction.