Home Music Shakers n’ Bakers: Heart Love
Among the pantheon of Gods in Jazz Valhalla, few musicians occupied their place in the realm with as monumental a stature as Albert Ayler. This is a direct result of the fact that the tenor saxophonist untold power and tragic stature to the music of Jazz which no amount of “bigness” (the usually attempted route taken by very many musicians) can achieve. However he was mistakenly much vilified when he took up in his late period with lyricist and vocalist Mary Maria Parks. Most critics and a multitude of free improvisation refuseniks chimed in to almost wipe out the achievements of the man who was a member of the proverbial Holy Trinity of Jazz (where John Coltrane was designated The Father, Pharoah Sanders was The Son and Mr Ayler was The Holy Spirit). Indeed no saxophonist before or after was quite the master of mood and atmosphere with the ability to coordinate colour and structure to a rare degree.

Shakers n’ Bakers’ Heart Love recording have rightfully chosen to seize that (Holy Spirit) aspect of Mr. Ayler’s playing and have sung its glory with a myriad hosannas. The opening song itself – the proverbial “Message From Mother Ann” – opens the proceedings of this recording with apocalyptic zeal. In lyrical lines (as well as between the lines) we are swept into the music of Albert Ayler and Mary Maria Parks. We immediately recognise – if we are open to it – that this “heart music” of Albert Ayler and Mary Maria Parks, so properly called Heart Love by Shakers n’ Bakers 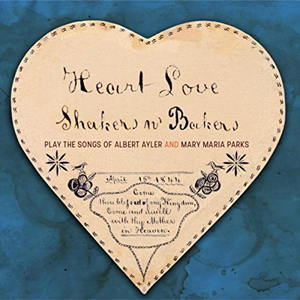 is so much more than about the geometric, algebraic and exponential equations of Jazz. If anything Mr. Ayler’s was music of the deepest humanity and not just in overtly dramatic terms despite the fact that the tone of his tenor was strident and hard-edged; sometimes even bitterly so.

Appropriately then, Shakers n’ Bakers shine a brilliant spotlight the aristocratic grace of Mr. Ayler’s approach to spirituals as evidenced in his glorious album Goin’ Home (Black Lion, 1994). And so we hear these musicians led by saxophonist Jeff Lederer approach this music from the heraldry of “Everybody’s Movin” and “Oh Love Of Life” to the profound – in “Music Is The Healing Force Of The Universe” – to the deeply melancholic and worshipful “Goin’ Home”. This paves the way, of course, for the grand finale – “Heart Love”, which is the all too appropriate title of this album. This and indeed all of the music is a timely and exquisite reminder that Albert Ayler was far from weighted down by the millstones prevailing for the Black man – then as is so tragically the case even today. “Heart Love” (the music) deepens greatly the etymological nature of each word.

Together they point to something poignant that Albert Ayler and Mary Maria Parks always wanted the world to know; something the world around them tragically rejected. But also important to note is how Jeff Lederer completely transforms his musicianship as he slips into character to play Albert Ayler throughout. Finally there are the vocals of Mary LaRose and Miles Griffiths together with those of the Heart Singers Amy Cervini, Melissa Stylliano, Toni Seawright and Chelsea McClauren, and certainly the music of the stellar cast of other musicians all of which imparts an operatic quality to the repertoire and makes for another wonderful way to enjoy the music of Albert Ayler and Mary Maria Parks.