Home Music Satoko Fujii: That No One Has Heard Before 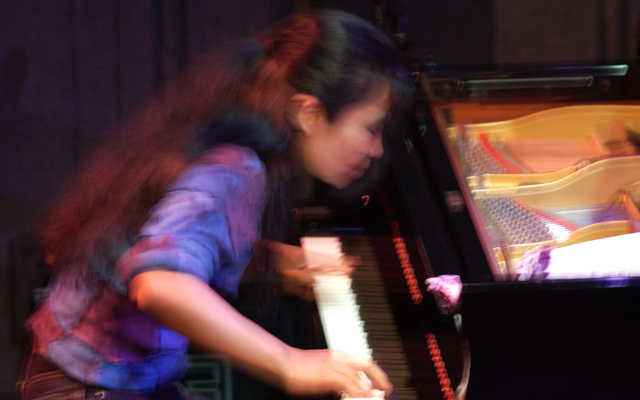 “I would love to make music that no one has ever heard before,” says Satoko Fujii. Remarkably with every performance in the studio and on stage the pianist appears to be getting ever closer to what has been her musical Holy Grail. The turbulence aroused by the magical depression of 88 weighted ebony and ivory keys, together with her often uninhabited plucking of the tempered high-carbon steel strings tautly strung the belly of the beast have combined to give Fujii’s music an unique aural canvas. It is the sound of wind being sliced and diced by skilled fingers amid the wordless whispering of coarse silk as silence becomes sound. It is also the unveiling of a myriad melodies that spin, leap and pirouette in rarefied air, agitated by the blur of her right hand, while almost unbelievably – from someone so small in stature as Fujii – her left hand conjures visceral rhythms through chords that have been coaxed and commanded, cajoled and beaten and subjugated with a series of sinuous and rapid-fire strokes.

Satoko Fujii is the epitomé of the artist who experiences the world of sound and silence with every pore in her body. It is thus hardly surprising that her response is to capture the energy between the two polar opposites as if she were predestined to be the medium in which the agitating particles were colliding into song. The preternatural swing of what ensues sounds natural and inevitable. Ego doesn’t come into it at all: rather Satoko Fujii acts as a conduit between the music and her audience with a purity that few can emulate. Do I hear the words: ‘intellectual pianists’? But to describe as merely ‘intellectual’ a pianist such as Satoko Fujii would be to miss out the huge humanity of her playing. This is the kind of playing that grabs hold of our ear in both her magical duet with the marvelous bassist, Joe Fonda, as well as in the mystical collision of melody, harmony and rhythm of Fujii’s Orchestra Tokyo.

Take “Paul Bley”, the opening track on Duet: in the hands of Satoko Fujii and Joe Fonda it is a sinuous, conversational affair and the way the duo colour the lines as one reaches into the upper register of the music, while the other delves into the depths of the lower register is done with enormous subtlety. The music throughout its half an hour or so of music is simultaneously intimate yet with true gravity. 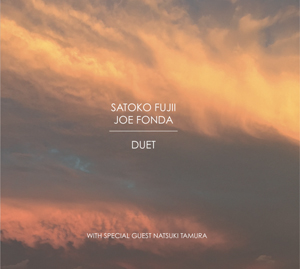 Both Fujii (in her left hand) and Fonda in his right, bring out the stepwise motion to a nicety – sometimes reassuring, sometimes questioning. Both Fujii and Fonda are not artists who take even the free improvised components of this music to extremes. They don’t intervene in the logic or the madness that characterises Bley with rather accurate pointillism and they do so with such mesmerising effect. “JSN” follows majesty of “Paul Bley”. In its acronym is a mélange of the personalities of the musicians after whom it is named. Here Natsuki Tamura is added on and he brings the blue flame of fire into the music. All three musicians dive headlong into chart at a buoyant pace. The rhythms are bright and springy; full of energy without freneticism, and joy is palpable in every note. Fonda brings a somewhat terse gravitas to his already authoritative bass with the addition of the bass flute, spicing up the bottom end of the music with dazzlingly daring ornamentation. Natsuki Tamura is utterly forlorn and compelling at the same time. The disc ends somewhat abruptly – or is it the chart that does? Either way, when one’s appetite for the music of Satoko Fujii is whetted, what’s offered is often never enough.

Compared to most modern extended ensembles the ones hosted and conducted by Satoko Fujii must surely have to contend with music that is not so much complex as it is often dense, brought together with varying degrees of tautness and pressure points, and with so much heat that there is never any let-up in pressure until the very end. Even in slow, stately movements, one gets a palpable sense of – for instance – marching in leaden boots (“2014”) and again in what seems like iron-lung-like breathing by the saxophonist Kunihiro Izumi on “Peace”. Musicians are on their toes throughout the unsettling music of Peace performed by Fujii’s Orchestra Tokyo. 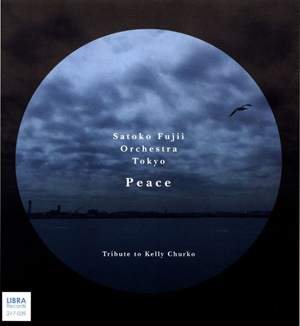 And yet, how does one describe the long exhalation that accompanies the feeling of ‘peace’ without necessarily conjuring the tempestuous carnage of ‘war’? How is one meant to see the edifying brightness of dazzling ‘white’ without plunging into the terror of ‘black’? These and other challenges are so expertly handled by the musicians of the Satoko Fujii Orchestra Tokyo. They respond to her every gesture in a similar manner to the musicians conducted by ‘Butch’ Morris. They are happy to take risks with Fujii. They will follow her to hell and back. For her part, however, Fujii is all the inspiration that they need. “Beguine Nummer Bins” is a case in point. She seems to unbutton the music for her woodwinds and brass, and the rhythm section as she does throughout Peace. Her translation of momentous events is couched in ornamentation that is laden with generous, yet never overbearing gestures. And these musicians respond in kind: with unerring pacing, pausing just long enough to let the music here, breathe. It’s as if we exhale with them. All of this, of course, would count for nothing if we were not able to hear their music in such beautifully immediate sound. So we should pay tribute to Satoko Fujii’s longtime partner in life and in music, as well as her producer, Natsuki Tamura. On Peace Tamura not only emerges as one of the great trumpet whisperers, but also as one who continues to help raise the music of Satoko Fujii to the Divine.