Sarah Bernstein gives new meaning to the very word “violin” almost five hundred and fifty years after it came to be adopted by the English around 1570; that was forty years after the instrument itself began to show up in performances, born of the Byzantine lira, we are told. It rose to eminence as a three-stringed instrument played in an individual context in royal courts, long before it propelled all music including that of the symphonic orchestra since the time of Bach, and in the hands of great violinists through the ages – from Paganini, Heifetz and Menuhin to Perelman and Kennedy and, in another world, from Stuff Smith and Eddie South and Stéphane Grappelli to Jean-Luc Ponty, Didier Lockwood, Sugarcane Harris, Majid Khaliq and others – who’re inseparable from the violin today.

Listening to Sarah Bernstein play the instrument it is clear that she not only belongs in this illustrious musical lineage, but when you add her poetry and the recitation of it into the mix she emerges as an artist with a myriad dimensions, doing much not only to give new meaning to her instrument, but to the art of poetry, and of story-telling in song. Her duet with Satoshi Takeishi does much to bring attention to their art. In Crazy Lights Shining one finds oneself both, seduced by an extraordinary artist, and abducted and held in a prism of her poetry and music. 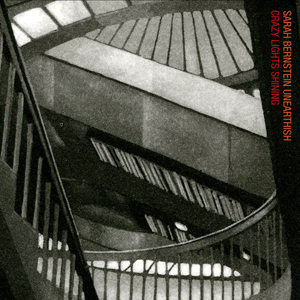 To begin with Miss Bernstein seems a player who is utterly determined to make sure that new writing is exposed to audiences including to those who are not quite ready for something quite as challenging as what she and Mr Takeishi (as Unearthish) have provided as repertoire on this recording.

While there are some special effects such as echoes and delays to add drama to the performance (as in the opening recitation of “For Plants”) essentially Miss Bernstein relies on the naked and natural beauty of the violin sound to provide an uplifting fore and background for her voice and its use in the recitation and singing of her poetry. The music itself is written with a great deal of love and passion for the lyrical elements of the violin as well as its virtuosic qualities. But Miss Bernstein is also an “intellectual composer”, in that she is “old fashioned” in the best sense. She writes atonally but with – like the music of Alban Berg – there’s an incredible sense of tonal satisfaction in it. There is also a kind of constant flow of ideas from the word that defines the poem; sometimes (as in “Drastic Times”) flowing right from the title itself, becoming a raging flood not long after.

Also, Miss Bernstein seems to constantly go for beauty of tone and articulation and thinking about bowing and vibrato and all of the high-jinx of the instrument and “Map or Meaningless Map” is an exquisite example. Significantly, all of this music has been written with Mr Takeishi in mind. He is a percussion of the highest order whose battery of instruments is a veritable extension of his senses themselves. We perceive this all over Crazy Lights Shining. In song after song, the percussionist shadows Miss Bernstein’s violin, her voice and her poetry, dodging in and out of the darkness and light of each poem. It unfolds from her delicate pizzicato playing on “Crazy Lights Shining” like a kind of wispy “Tinkerbell” flitting out and then into the proverbial darkness with what sounds like the thunder of a set of low drums. For the sound of Miss Bernstein’s voice reciting and singing her poetry; for the resonance of bow on gut and for the animated sounds of Mr Takeishi’s fingers on skins and all manner of bells, this is an album to die for…