If there is anyone who is willing to truly go the distance and then some with the guitar and take a leap of faith to pursue the music that beckons from realms undiscovered it is Samo Salamon. That’s right; a slight musician from Slovenia, whose name doesn’t exactly leap to mind, but who like the Frenchman, Nguyên Lê is tearing up anything that remotely resembles a musical border, is reminding us that there is nothing sacred about tuning a string to a ‘conventional’ pitch, or plucking, strumming, or even caressing it the way one is used to. So forget what you heard about the music coaxed out of an axe, forget about what kind of musical partnership is needed to make this music stick in the memory because here comes Samo Salamon with Stefano Battaglia – no stranger to surprise either – as they blow their way through Winds. 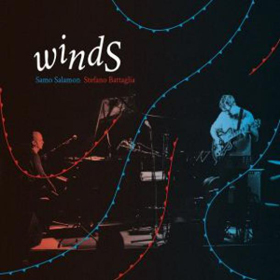 It is a critic’s joy to discover a major talent relatively unknown outside musicianly circles appearing on a minor European label. Both these musicians are complete artists, possessed of genius with fingers head and heart. Such hyperbole is not misleading. Heard on Winds makes everything – literally everything – that Samo Salamon and Stefano Battaglia do sound enthrallingly fresh and unfamiliar. Indeed you have to be hearing these five tracks for the first time – mostly so – and you will certainly be mesmerised by the guitarist’s and the pianist’s recreative energy. Backed by almost savage technical electricity they lift you far above studio conditions of the polished and impersonal expertise that too often accompanies the technically accomplished. The musicians’ whole being seems to expand into thie music and they embody an emotional involvement through rhythmic flexibility, gloriously sonorous tone and dynamic nuance – qualities that help create an aura of authority in every piece.

Few guitarists like Samo Salamon, or pianists like Stefano Battaglia have created the gripping surges and storming codas with such brilliant fury. Any possible picture of the duo as a tired or ailing form of musical association is banished from the imagination with melodic, harmonic and rhythmic ingenuity such as on the five pieces here. The range and scope of the music is nothing short of magical in the heroic strength and propulsion of its musical constituencies. The graduated swell of sound with fluent mobility across bars often creates its own tension, while true softness is often heard elsewhere. There’s not a note cold, and not a note perfunctory anywhere on this disc.