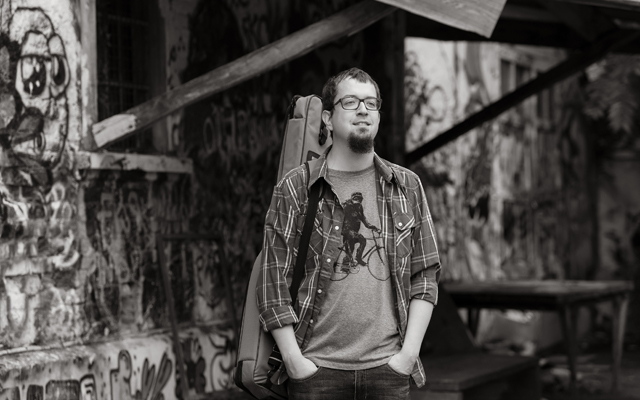 In the fast-flowing torrents of contemporary music, it isn’t often that a musician – especially a guitarist – is brawny enough to stop and reexamine something that has already been successfully done by him or herself, or by other musicians. Somehow, Samo Salamon always seems up for a challenge. In every one of his past recordings he seems to jump at the idea of ‘zigging’ when everyone else suggests that he ‘zag’. This often means that Salamon is even up for doing something that does not suggest itself naturally to him. Clearly this is the intent of his performance on The Colours Suite, a record on which he recasts music from colours he probably never thought of before, as well as transcribing for two drummers and a bassist – something he hasn’t instead of the regular woodwinds of their incarnations.

Pat Metheny once tore through his musical experiments on an album that envisaged a scenario where the whole of his sound-world was turned upside down. The album in question was his 1994 Geffen production Zero Tolerance for Silence. Distortion and musical mayhem was the name of the game there. While The Colours Suite by the Samo Salamon Sextet does not veer that far of the aural dial it certainly veers left of where his musical compunctions often lie. Here, for instance, Salamon’s tempi approach frenzied extremes, more free than anything he has ever put down on record. Conversely expecting discordant outpourings will be hugely surprised by Salamon diving headlong 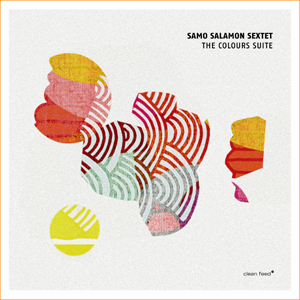 into mellifluous refractions of sound between his guitar, Julian Arguelles’ saxophones and Achelle Succi’s bass clarinet. All this in addition to the reverberating echo of eerily announced chords on his guitar.

This is The Colours Suite. Naturally all of the primary colours are present and accounted for. But in tonally dynamic fashion, Samo Salamon also introduces “White” and “Black” to “White”, “Yellow”, “Brown” and “Grey”; from no colour, to all colour and then three hybrids. The music in these movements soars above the proverbial footlights in appropriately operatic fashion, even though their slow unwinding of the lyrical calm thins when the bass clarinet falls silent. However, Salamon is quick to pick up the slack and occupy more of the sonic space albeit without overcrowding it. The guitarist’s dry-point traversal of the music in “Red”, “Blue” and “Green” turns from hot to cool, as he underlines the intrinsic humour of these pieces in a way that might give guitar purists pause for praise. His spacy timing and sensitive harmonic pointing enliven this extraordinary album.

There is further proof that Samo Salamon can play simply and directly when he chooses to can be found on his intuitive dynamic scaling of “Black”, where he and the rest of the ensemble also bring out the music’s chamber sensibility to brilliant effect. In its cantering rhythm of the music never falters despite its often precarious tempi. Moreover Samo Salamon and the other musicians remain forceful and forthright throughout the recording. And there is drama not only according to tempo, but also to key signature. The only perplexing question is: After traversing the palette of a myriad of brilliant colours, why end The Colours Suite on an obviously misty, “Grey” note?