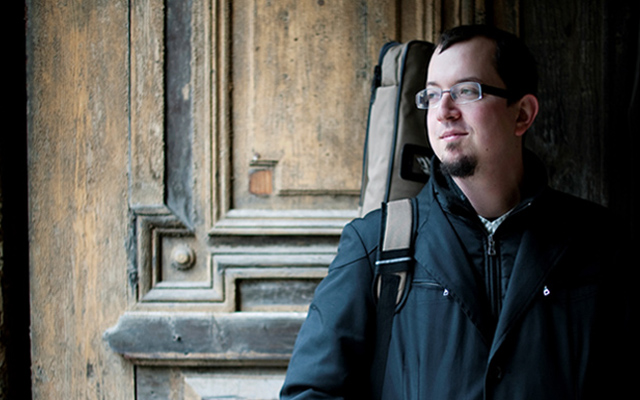 The word ‘experimental’ has a connotation as vacuous today as the words ‘avant-garde’ when used to describe music from Berg and Webern, Stravinsky and Stockhausen to Roswell Rudd and Albert Ayler. The reasons are obvious. When a musician tries something wholly new it ceases to be new thereafter but becomes part of the historical past. In fact as the notes of this music decay and die it may very well never even be remembered, unless so memorable that they stick like burrs in the long-term memory. This is not necessarily the case only with melodic music but that helps. Perhaps this will be the reason for Samo Salamon’s Bassless Trio music being remembered for a rather long time. He will, of course, have to perform at the height of his powers beyond this recording, for it is no longer the music of the ‘now’ but something Salamon has been committed to for several recordings. 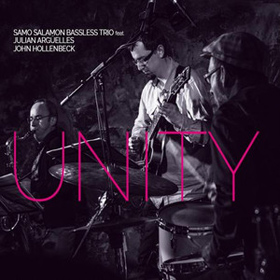 It is now a question of the musicality of the performance. But there is enough here, in Unity to sustain it for some time to come. I am in two minds about the veracity of letting the drums hold up the bottom end of melody and harmony, for the simple reason that John Hollenbeck often enters into the melodic and harmonic lyric lines of the music. For one thing his instrument is one where various items of percussion have been tuned to frequencies rather higher than the contrabass. Furthermore the tenor cannot really substitute for s baritone or bass horn that could play the bass line of the melody. Having said that, however, there is something quite startling about the absence of an instrument so ubiquitous in any form of ensemble from a Jazz band to a symphonic orchestra. The question is: on balance, does Samo Salamon’s music seize the moment and capitalize on this?

The music certainly obeys the largely monochrome severity of obedience to a prescriptive treatise, one entirely of Salamon’s making. But while it must reside within thee environs, it is played with great mastery. It is adventurously developed and pursued. For instance, the striking invention in the interplay of the trio parts in ‘Dawn’ and ‘Moonless’ is luminous. Shall this creativity be applied to more narrative pieces and portraits that could do with full-spectrum sound? And how is the roar of the sea to be depicted in ‘Seagulls in Maine’? I believe that these questions are convincingly answered in the watercolour-like depiction of the landscape. You might say that Samo Salamon has taken a leap of faith and while the pieces do not always fit, the music is memorable for its bravery and forthrightness as well as for being a series of fine songs albeit played without a bass.