Home Music Ryan Slatko: First Impressions
With the seemingly endless flow of 21st century jazz to choose from, it’s refreshing when a disc turns up that harks back to the halcyon days when this music did swing without pretention; informed by a genuine mix of soul, a driving beat and fiery virtuosity. And so it is with First Impressions by pianist Ryan Slatko, who at this young age has embraced the values held dear by his venerable pianistic ancestors; tart, two-handed technique immersed in rippling melody and colourful harmony together with all the angles of broodingly, percussive and tumbling grooves.

And what an enormous bonus a to by joined by some of the most prodigiously gifted musicians – saxophonists Daniel Dickenson and notably Samir Zarif, who is blessed with a delightful round sound, lithe and elegant as well as warm and swinging, plus Linda Oh a bassist who plays with deep and spontaneous meditativeness, and Joel Ross, an exquisite musician with phenomenal instincts, a rare degree of maturity; 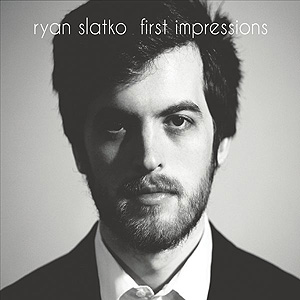 a vibraphonist who is at once simple, lyrical, abstract and profound. And finally there is the ubiquitous Ulysses Owens Jr. who at such a young age is arguably already one of the most influential drummer-musicians in Jazz.

Of course, this is Mr. Slatko’s show and what a magnificent job he makes of it. In his hands revered classics such as “Evidence” by His Outness, the great Thelonious Monk followed by Donald Brown’s “Waltz for Monk”. The former becomes a white hot volcano of intense expression and the latter the epitome of tenderness. The former song – like every song by Mr. Monk, presents formidable technical challenges, all of which are surmounted almost with nonchalance, the pianist’s focus resolutely serving Mr. Monk’s unique harmonic system and not the mechanisms involved in performing it. Another familiar tune, “Estate” is imbued with a particularly rewarding sense of rhythm, high-sprung, light and incisive and entirely secure.

However, it bears mention (again) that the presence of Joel Ross on several songs in this set is wholly transformative. Mr. Ross’ playing on each of the songs he is called upon to contribute to – especially “Waltz for Monk” – is exhilarating, extrovert and effortlessly virtuosic. He balances no-holds-barred emotions – soloing with epic-thrill-a-minute drama – with intelligent pacing and rock-solid musical instincts. It’s no wonder that the effect of his performances beg comparisons on many levels with those of vibraphone gurus, Lionel Hampton and Red Norvo, Milt Jackson and Bobby Hutcherson. Miss Oh plays with particular brilliance on “Waltz for Monk”. Indeed every song the bassist touches on this album becomes a glimmering gem.

To complete a wonderfully vivid picture, the recorded sound by Chris Allen is radiant, clear and detailed a rare feat especially with imposing performances by Linda Oh and Ulysses Owens Jr. competing for attention in the low registers. An album to die for…