The dynamism, élan, spontaneity and communicative immediacy characterising the Rotem Sivan Trio’s A New Dance is almost certainly to the unbridled genius of its main protagonist. He begins A New Dance in a slow, simmering swirl of dotted rhythms but quickly settles down for an uncommonly levelled and unstatic leaping, bounding melody. While the moist recording renders the dancing hands of the guitarist on In Walked Bud more like etchings come to life in wispy murmurs and the presence of a solid dance-like pulse reveals Angel Eyes in refreshingly firm light. And these are only three of the songs we’re talking about. 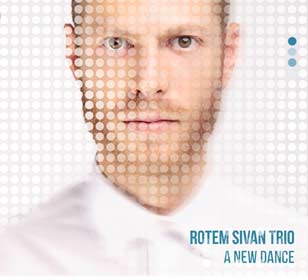 Rotem Sivan’s superb balances and subtle rubato liberate I Fall In Love Too Easily from its often mushy performance history. The guitarist especially shines when unabashed virtuosity is called for, as in Sun & Stars and One For Aba, while he builds Almond Tree to a powerful central climax, observing the accelerations that made his own song so compelling. He does more of the same in Fingerprints gracing his, by now, justifiably enthusiastic listeners with a beautiful rendition of a beautiful composition. Actually he does this from one composition to the next in a breathtaking display of fingerwork that might put many an older exponent of the instrument in a jealous rage. Such is the skill and showmanship of this young man.

The programme’s appeal also stems in part from the variety of texture and style achieved by interspersing music of various shapes and angles amid dazzling runs and vaunted arpeggios that Rotem Sivan is wont to make on his familiar flaming red guitar. His ensemble is carefully chosen. Initially one missed Mark Maclean on drums, but not for long, Colin Stranahan is a stunning addition to the regular duo of Mr. Sivan and bassist Haggai Cohen-Milo. He quickly has your ear drawing you into his beautifully complex rhythmic realm, bestowing upon your ear a beguiling spell with brushes and sticks. Together the three musicians work abounds in interweaving lines for a sort of three-voice-choir and they are actually also joined in by the vocalist Daniel Wright on Almond Tree and by the tenor saxophonist Oded Tzur on I Fall In Love Too Easily, extending the trio for two memorable pieces.

Each score contains richly expressive material that tests the concentration and cohesion of its interpreters. As led with meticulous attention to melodic balances and harmonic implications by Rotem Sivan, a musician who embodies a brave new world of artistry, the performances are fresh, articulate and poised.

Track List: A New Dance; Sun & Stars; Angel Eyes; One For Aba; Yam; I Wish You Were Here; In Walked Bud; Almond Tree; Fingerprints; I Fall In Love Too Easily.

Described by DownBeat Magazine as “a remarkable talent and a welcome new voice on the scene,” Rotem Sivan is taking the NYC jazz scene by storm. Sivan was born in Jerusalem, a city of mixed traditions, faiths and influences. After graduating from arts high school, Sivan entered the Buchmann-Mehta School of Music at The Tel Aviv University where he completed his studies in classical composition with honors. Read more…