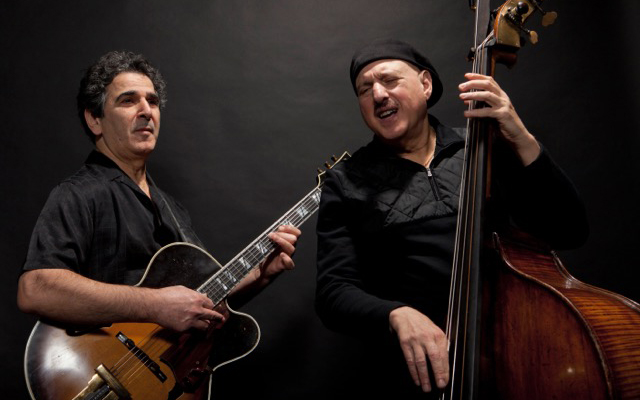 In many ways the title of this album – Introspection – by guitarist Roni Ben-Hur and bassist Harvie S is a most apt one. Anyone who has followed the artistic paths of both musicians will find that both seem to be introverted; inward-looking musicians who have thrived as miniaturists in the quietude of their instruments, infusing conventional – song – forms with an intimacy and an emotional intensity that can only be described as the poetry of feeling. The music on Introspection is a supreme example of how these characteristics have permeated into every aspect of each song, creating an eloquent and luscious sense of neo-Romantic self-expression – in the finest tradition – on the part of both musicians. 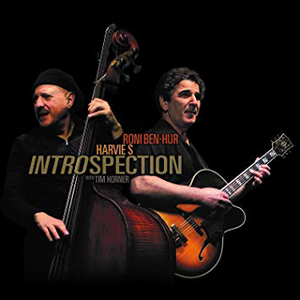 What marks the music out as uniquely their own is the manner in which both Mr Ben-Hur and Harvie S decorate even the simplest phrases – on the song “Introspection”, for example – not as ornament for ornament’s sake but as expressions of deeply felt emotion. Both musicians exploit, to the fullest potential, the range of their respective instruments, with phrases dramatically articulated in unison and when engaged in solo improvisations. They also force the listener to engage with them in the music purely in musical terms – that is, for the sweetness of melodic tone and colour, articulated in the finest sense that musical artistry has to offer. Mr Ben-Hur’s liquid glissandos are glorious and perfectly matched to the meltingly tender annunciations of Harvis S, even when he employs the sharpest possible pizzicato. Baden-Powell’s swishing Bossa Nova “Deixa” is a perfect example of this.

So snugly do these two musicians fit into each other’s presence that they not only ideate, but also perform as one. However, there is no disguising the singular personality of each musician who is deeply-imaginative and theatrical in his own fashion – Mr Ben-Hur clearly approaching his craft from sharper angles than Harvie S, who is more restrained, but no less exciting. At times the interaction seems to suggest a partnership in song that recalls how the greatest Lieder are performed by singer and pianist in the classical tradition. Here, as in Lieder, each musician is an equal partner in the process of music making and both known when to approach the limelight, say (or, more appropriately, sing) their piece before receding into the shadows to let the other musician bask in the spotlight.

It also bears mention that this is not a duo performance and that the third member of the trio – drummer Tim Horner – performs his role with the kind of grandiose serenity that befits the hushed elegance of this music. Mr Horner creates lucid open textures with his brushes and drum sticks and works his rhythms in to the strong, affirmative melodies, culminating in an outstanding performance in his own right. Together, all three musicians make this record one to die for…