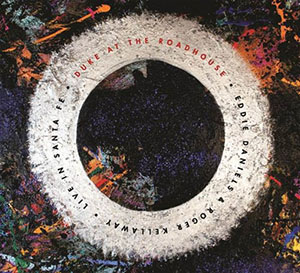 A recording of Duke Ellington’s repertoire, while it is no longer commonplace, might not be something to go the extra mile to hear if it—to quote the grand maestro himself—“ain’t got that swing”. Fortunately one of the most recent albums of the Duke’s repertoire is by the wonderful pianist Roger Kellaway in duet with the clarinet master Eddie Daniels and it swings with gay abandon from start to finish. Even as a trio with the relatively lugubrious cello (not heard of in Mr. Ellington’s musical performances, or on record) at the hands of James Holland, the music swings with remarkable tempo and with ravishing triangular counterpoint. It also bears mention that Duke Ellington recorded but three—at most four—solo records and his small bands were rarely trios; more likely quartets and quintets, or even somewhat larger. Mr. Ellington wrote for considerably larger ensembles and for his favourite instrumentalists. So to hear his music in such an intimate setting is rare and unusual as Mr. Ellington’s music thrived on multiple layers of sound; a myriad of colours and tones and textures of a rather wide array of horns.

However, not once does this remarkable recording fall short of any of the above. There are no secret ingredients here. Mr. Kellaway is one of the principal characters in this virtual operetta that is Live in Santa Fe. The pianist is, regrettably, not as well-known as a featured artist as he should be and his significant reputation rests upon a few recordings and the eager following of cognoscenti. But he deserves to be much better-known. His mastery of expression is something to be breathtakingly admired. Audiences have often become numb with delight and have been left gasping at the cut and thrust of his attack as his fingers flail across the ivories. He dazzles equally with majestically executed arpeggios and fluttering runs as he does with sublime and half hidden harmonies. His phrases consist of gorgeously coloured notes played in fluttering triads and triplets as well as in wider spaced multi-coloured notes that carve the air in wider arcs. Melodies might pop up in spirited inversions or simply linear innovations awash with polytonal colours and textures. Best of all, he has such a mastery of Duke Ellington’s repertoire that he has made it his own in a singular manner and created breathtaking new ideas which are barely hidden in the versions of Mr. Ellington’s songs that he plays. But he is never alone…

The great Eddie Daniels is never very far behind; in fact he is not behind at all, but rather the pianist and the reeds and woodwinds player are entwined like the proverbial double-helix and with that musical DNA are able to create this wondrous music that would please the stellar cast of musicians who once made up the Duke Ellington Orchestra. Mr. Daniels dazzles the likes of Jimmy Hamilton and Russell Procope and Norris Tunney looking on from their heavenly abodes, with his breathy calisthenics. He plays the clarinet as if thirsting for the perfect note. In the upper register he is like an excited impala leaping from plane to plane and creating whorls of music in gentle parabolas and ever-widening arcs. While in the lower register he is full of hot flaming breath, gushing as if with volcanic power; creating veritable vortices that fill the ensuing music with great gusts of primeval energy. Mr. Daniels frolics and dances in and around these quantum packets of energy drawing not only Mr. Kellaway in, but also James Holland, who warms the music up with the depth of his gravitas. On tenor saxophone, Eddie Daniels is a master in the mould of all the Coleman Hawkins, with his forthright tenor language that creates the literature of Duke Ellington anew.

It is difficult enough to reinvent part of Duke Ellington’s repertoire on a single record; these musicians have given post-show listeners (those who were not able to attend the performance) a significant slice of The Duke. His swinging songs such as “I’m Beginning to See the Light” and “Perdido” provide a wonderful sense of the short songs that Mr. Ellington wrote. The blues of “Creole Love Call” is not often heard, but Duke Ellington introduced that song in a legendary version that included the great Adelaide Hall. On this record, Mr. Daniels brings her contralto back to life with his breathy version, ululating as the singer’s gentle vibrato once did. Roger Kellaway gives the impression that “In a Sentimental Mood” is about to be played up-tempo, but when Mr. Daniels and Mr. Holland take command, the flame of elemental melancholia in the great song is once again re-lit especially by the vocal-like gymnastics of the former’s clarinet followed by those of Mr. Holland’s opus. This earthy and ponderous mode is brought back again in one of Mr. Ellington’s most famous pieces: “Mood Indigo”.
By now, imagining how Mr. Ellington might of felt is de rigueur. Both Roger Kellaway and Eddie Daniels have imagined this well. Eddie Daniels does so with “Duke at the Roadhouse” and Roger Kellaway with “Duke at Ojai”. These two exquisite compositions break up the repertoire which ends as it must: with a roistering version of “It Don’t Mean A Thing”… and suddenly it seems sad that this marvelous record is over.

Roger Kellaway on the web: rogerkellaway.com

Eddie Daniels on the web: eddiedanielsclarinet.com