There has always been a very high degree of comfort at work in this disc by the contrabassist Rodney Whitaker – an album entitled Oasis – The Music of Gregg Hill. Mr Whitaker and the composer Gregg Hill have collaborated on two other occasions and the output has been exciting and elegant. The repertoire on this disc doesn’t simply pick up from where both men left off in 2021 with the music on Outrospection. In fact, the music takes a proverbial leap forward.

The ease with which these two – and indeed for all the musicians in Mr Whitaker’s ensemble – come from the fact that all of the music on this disc was composed for friends, freeing the composer from the demands of formality and allowing him to engage 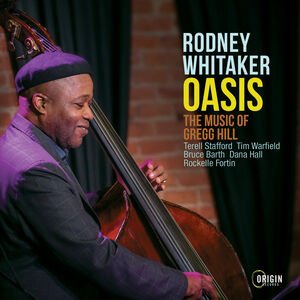 in an epigrammatic style in which the motor energy makes for the engagement of the occasional battle that ensues when each of the musicians – from Mr Whitaker down – indulge in putting their own idiomatic touch on the composer’s artistic vision.

Throughout it all the propulsion comes from Mr Hill’s excellent ear for sound that provides music that musicians, especially Mr Whitaker together with pianist Bruce Barth and drummer Dana Hall like to play and which audiences like to hear. Once you add the harmonic flights that the protagonists of brass and woodwinds – trumpeter Terrell Stafford and saxophonist Tim Warfield – indulge in, you have all the makings of an absorbing album; in fact the third absorbing album of music between Mr Hill and Mr Whitaker and his ensemble.

As played by all of the musicians then, this music gives the most sustained pleasure you would expect from an hour+ long disc. Mr Whitaker and his ensemble play with brilliant focus and timbral variety bringing electric flashes of harmonic and rhythmic energy to even the simplest of melodies. The tonal homage to Classic Black Music – best represented by 1950’s and 1960’s composers and musicians who followed musicians such as Cannonball Adderley, Art Blakey and Horace Silver – who carved out a monumental niche for today’s musicians [including Mr Whitaker] to build on.

The icing on this musical cake comes from Rockelle Fortin, who not only writes obliquely idiomatic lyrics to “Betty’s Tune”, “Interlude”, “To the Well” and “Oasis”, but also navigates the nuanced consonances and dissonances of the melodic lines, but sings in gloriously drifting arcs that swell along with and against the melodic lines, ebb and flow with soaring and swooping emotional ellipses, revealing new dimensions to the sonic miracles created by Mr Hill’s music and played by a group of musicians who seem to parlay with him – and each other – like old friends from a long and noble musical dynasty virtually pioneered by the iconic musicians [Mr Adderley, Mr Blakey and Mr Silver].

This is music that is gentle, touching and painted in sensible human proportions – mimicking new paths in old forests… some old genes newly – and eloquently – expressed…