Every pianist – conservatoire-trained or self-taught – learns to use both hands; the more they practice, the more dexterous they become. But when dexterity melds with artistry something magical occurs. As the fingers deliver glancing blows upon the keys of the piano, they begin to sing. Roberto Magris is among that small tribe of pianists who when they play the piano, the song begins with tips of the fingers themselves.

This does not mean that Mr Magris merely plays softly. But he is such a consummate craftsman that his pianississimo is so perfectly uttered sounds like a whispered breath deflecting off the key that has been struck; and when the music – usually written by him – demands that a particular note or series of notes is meant to be played fortississimo then you can be sure that it will resound in the right and thunderous manner in which the emotion of it [the note or phrase] has to be expressed. Another endearing quality of Mr Magris’ pianism is that he eschews “style”. Rather he plainly understands that each interpretation [of the music that he is playing] is but one possibility and so in that performance he offers us the very enticing opportunity to open our minds top the musicality of the work he is playing.

Mr Magris brings a juicy, jazzy brilliance to each of his performances. His extreme virtuosity often includes something akin to a rolling of the hands along the keys while playing a dazzling run – even a vaunted arpeggio sometimes. In this regard he is a bit like Don Pullen who did likewise by rolling a closed fist by rotating his wrists on the keyboard in a kind of fury, to produce a flurry of notes all squashed up against one another. Mr Magris is also a master of expressive mood and atmosphere, with the ability to coordinate colour and structure in a piece to a rare degree.

On every disc that the pianist releases he always takes us – swinging and dancing – to another world. It’s often full of glinting lights, mysterious depths, expectations, hopes and doubts; sorrows and joys. His last two discs [under review] – especially when he plays original compositions – also reveals a meditative side to him that borders on the metaphysical. In each of the very thoughtful pieces that he has composed on both these disc he offers us a look at music of profound psychological ambiguity the ideas of which always manages to reach some sort of resolution with buoyant, aristocratic grace. 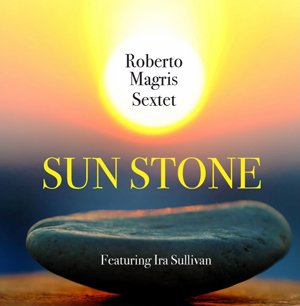 Roberto Magris Sextet: Sun Stone This album takes Mr Magris’ thinking and music to another level; at the epicentre of which the physical, psychological and spiritual seem to meet with effortless distinction between the many filigree lines and aristocratic elegance of his playing, as well as in the playing of the late reeds and woodwinds master, Ira Sullivan. Both musicians feature as important characters, playing off each other, on this champagne disc – complete with fizz and finesse. In sheer colour and variety, in the depth of characterisation and the exceptional range and refinement of its pianism – and Mr Sullivan’s accompanying flights – Mr Magris imparts a power and towering stature to his [largely] original work.

These are deeply-felt [almost] chamber pieces, meticulously balanced between the pianist and the horns that accompany him throughout. The two “Sun Stone” variations are beautifully balanced; the playing by this sextet is disarmingly natural and eloquent. As always Mr Sullivan interiorises the music with depth and uncommon genius. As a result his soli are idiomatically beautiful, infusing the inherent drama of the melodies with majesty, stretching their stories and ideas with the kind of harmonic fluidity that only a master musician could. Each of the musicians here – including trumpeter Shareef Clayton, tenor saxophonist Mark Colby [who has also, tragically, passed away], bassist Jamie Ousley and drummer Rodolfo Zuniga – are in their harmonic and rhythmic excursions that capture Mr Magris’ singular musical ideas with introspective poetic fantasy. 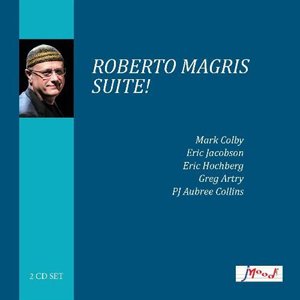 Roberto Magris: Suite! In naming this double-disc Suite! Mr Magris uses a word that references his music’s “bigness” – both the idea of his sound-world and the diaphanous sonic template that he always deploys in the performance of it. There is astonishingly insightful playing throughout, and both discs feature repertoire that is musically captivating and technically blemishless whether it is Mr Magris’ interpretations of more recent music – such as “In the Wake of Poseidon” by Robert Fripp and King Crimson, or John Lennon, who is paid homage to an idea and emotion with his iconic piece “Imagine” – or in Mr Magris’ original work such as the magnificent “Suite!” and “Love Creation”.

In the variety and panache of the rest of the repertoire – especially in the choice and performance of the standards – Mr Magris together with his group that includes trumpeter Eric Jacobson, [the late] tenor saxophonist Mark Colby, bassist Eric Hochberg and drummer Greg Artry – brings effortless urbanity and lyricism to all the items. PJ Aubree Collins’ narratives add a special haunting quality to the pieces that begin with her voice. Of course, Mr Magris plays everything with debonair virtuosity and a swagger bordering on pianistic insolence. And happily, Paul Collins’ audio notebooks return with an account– and his experience of – this studio performance. An epic two-disc set to die for…