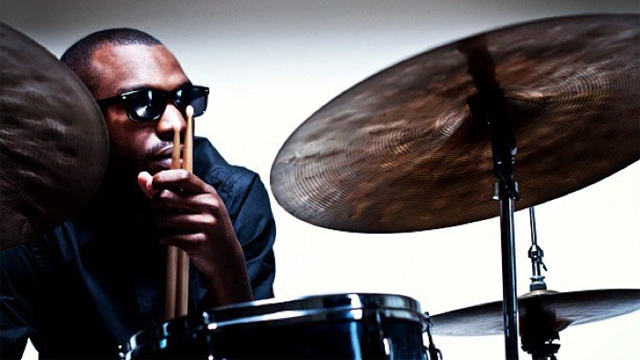 The black-and-white design of this package gives nothing about the music on the disc contained within away. If anything, it suggests a dark repertoire. But then you turn to the track list and you discover that song number six is “My Blue Heaven”. The track stands in stark contrast to the imposing design of this CD. The track, we are told by drummer and leader Reggie Quinerly is played in homage to the legendary pianist Mary Lou Williams. So you are now curious about the rest of the music, which is when you get to know its presenter, the drummer Reggie Quinerly. Here is a musician, a true percussion colourist with an extraordinary sound, whose music floats in exquisite, svelte lines. Here is a musician who has a melodic approach to drumming . Who plays with long-limbed and supple rhythmic flexibility and in soft tones instead of the loud hammering of a rock drill. And this is unique. Not only among drummers, but young musicians as a whole. 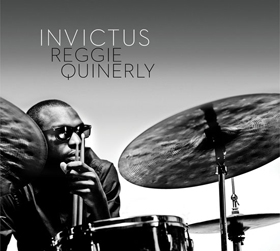 Despite the softness of Reggie Quinerly’s approach to drumming, there is an underlying visceral rhythmic excitement in these charts. Mr. Quinerly has an enigmatic relationship with tonality; his language always linear and full of lustre. He is aided and abetted by Warren Wolf, who shares the drummer’s velvety sound with a supple rhythmic flexibility of his own. Mr. Wolf has a big-boned and generous sound with a sense of depth and spaciousness that gives each piece an almost orchestral scale. The playing of the two men is not the only flawless work on the album. Pianist Christian Sands, guitarist Yotam Silberstein and bassist Alan Hampton contribute in no small way to this album. This is a model case of sensitive give and take between five instrumentalists sharing so much intimacy and subtle variation of colour; of melodic and harmonic charm between each other. And then there is the supple freedom with which Reggie Quinerly leads this refined Quintet.

The character of this quintet is showcased by the magnificent “Variation 24” a piece of exquisite sensitivity in which guitarist Yotam Silberstein plays most eloquently. Mr. Quinerly does a star turn with his meaningful composition – “Kunst Überlebt” which when translated from the German means “Art Survived”. Apart from the didactic aspect of the piece there is also the featured solo by another fine young musician: pianist Christian Sands. These two compositions define what Reggie Quinerly stands for although the drummer is extremely adept at making old charts new. “My Blue Heaven” utilises Mary Lou Williams’ arrangement of the song. The soulful blues is served by gorgeous solos by the guitarist, Warren Wolf and Christian Sands. The repertoire on this disc might seem a little too cool, but there is never a sense of the ensemble holding and playing safe when they should be going for broke. The fine music and excellent engineering by, among others the ubiquitous Dave Darlington make a compelling case for owning this album.

Reggie Quinerly grew up in a rich musical environment – one that nourished artists as stylistically diverse as pianists Jason Moran and Robert Glasper and guitarist Mike Moreno (featured on Freedmantown along with pianist Gerald Clayton and saxophonist Tim Warfield). They all attended Houston’s High School of the Performing and Visual Arts, where the teachers, said Quinerly, were “incredibly devoted. They gave us a real head start.” Read more…