This recording – Faune by Raphaël Pannier and his sterling quartet is one of two [the other being Spirit Song by Simon Moullier; oddly enough also a French mallet percussionist] of the finest debut recordings of 2020; as well as miles ahead of anything that you are likely to have heard, or might listen to, for a long time to come. Here’s why: [both] are bristling with authentic ingenuity of invention within a tradition that demands so much of its artists in a way that “paying one’s dues” does not even begin to describe how difficult it is to render something of quality, let alone excellence in every department at this level. And if that may sound like hyperbole, it is absolutely merited. 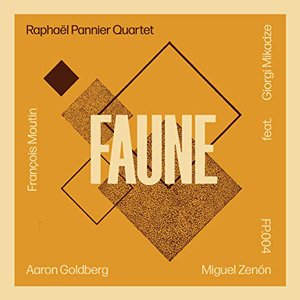 Every chart is meticulously thought out, probably even before it has been conceived of and certainly written, it would seem. This is followed by a performance in which the black dots quite literally fly off the staved paper on which they have been written and dance in the rarefied air around your listening room. This kind of craftsmanship is especially evident on the two classical pieces that Mr Pannier has re-crafted for this recording. Both the Messiaen and the Ravel pieces are more than mere modern interpretations of arguably two of the most difficult-to-interpret composers in contemporary music, they absolutely honour every aspect of the two men and representations of their respective œuvre; both the asceticism and spiritual hedonism of Messiaen in “Le Baiser de l’Enfant Jésus”, and the world of Ravel’s extreme formal and tonal ambiguity in “Forlane”.

Clearly interpretation of contemporary classics is not to only virtue in Mr Pannier’s work. [For the record he also opens this recording with one of the most brilliantly inventive re-casts of Ornette Coleman’s “Lonely Woman” in an eternal arrangement all his [Mr Pannier’s] own and he also prefaces, and adds an eloquent and mysterious dénouement to Wayne Shorter’s “ESP”. Moreover his rendition of Hamilton de Holanda’s “Capricho de Raphael” comes with an epic flow of thinking and execution of melody, harmony and bewitching rhythm. But wait a minute; there are Mr Pannier’s own exquisite compositions everywhere else on this recording and each is more beguiling and beckoning than the other. Each is a kind of tonal miniature that is imbued with a powerful mystical quality that is largely inspired by the seemingly elemental qualities by the artist’s imaginary landscape.

Finally there is a small, almost forgotten, matter of Mr Pannier being a drummer. Should you wonder why you may forget this the reason would be because Mr Pannier seems to cast his every performance as a percussion colourist rather than someone attacking, quite literally, a battery of drums and cymbals. His touch is full of the delicate cut and thrust that results in glancing blows at the skins of the drums; and swishes at the brass of the cymbals, which he seems to view as tissue rather than metal – although, I dare say, he can also bring about waves of rolling thunder when the music demands, such as on his ferocious and whimsical “Monkey Tree Puzzle”.

Let’s also not forget that through the masterful repertoire on this recording Mr Pannier has the finely-honed skills of a terrific musical director in Miguel Zenón, who also contributes his highly articulate and brilliantly vocal alto saxophone to each song. For the record Mr Pannier could not have asked for a finer contrabassist than François Moutin, who is, throughout, the perfect doppelgänger for Mr Pannier’s rhythmic adventures. The pianistic genius of Aaron Goldberg is also palpable throughout while pianist Giorgi Mikadze shimmers on the music of Messiaen and Ravel. To top it all we are even treated to subtle electronic effects by Jacob Bergson. All of this is captured in the warmth of this brilliantly engineered recording by – who else – Mike Marciano, aided and abetted by Max Ross. Who could ask for more…?