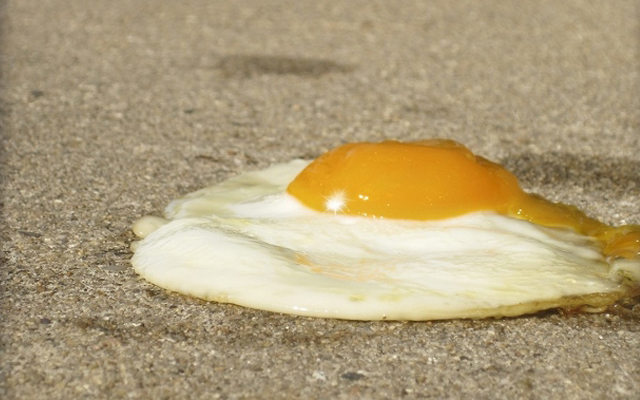 The seamless, elastic world of music must surely be engaging to body and soul as if it were charting sonic events in the hot and heady days of a seemingly parallel universe. The music of a clutch of artists playing music intoxicated with the gaiety and passion for life in chance encounters and never-ending emotional thrills. These four discs lay out the sustaining power of trombone and saxophone, bass and drums with elegance and ease. In ensemble and solo sojourns the musicians on each of the discs create lines that flow, charm and interact in an entirely natural and unaffected manner. Every one of these Posi-Tone releases fulfils the promise to entertain and keep listeners in a constant of wonder. 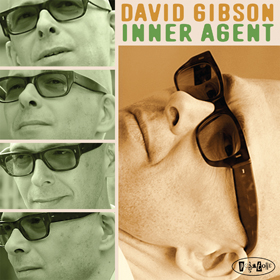 David Gibson is a serious ‘student’ of his chosen instrument: the trombone. Not only does his virtuosity enable the songs on Inner Agent to spin out and display passages with dazzling facility but the emotional depth of his playing enables him to ‘sing’ with uncanny authority. More than anything, however, this recording follows in the great tradition of the trombone, paying luminous homage to the great Curtis Fuller with two tunes – ‘The Court’ and ‘Sweetness’. Gibson also takes his reverential manner many steps further with beguiling compositions of his own. In the magnificent workings of ‘The Scythe’, for instance, his music and his playing combines accuracy and clarity with a warm ambience and almost tangible texture. The other players in the ensemble also possess a remarkable aptitude for agility in their loping, leaping and mutable soli. Together, Gibson and his cohort, especially trumpeter Freddie Hendrix – whose musical character is cast as a doppelgänger for the trombonist’s own – have succeeded in leaving us with a performance of exceptional beauty. 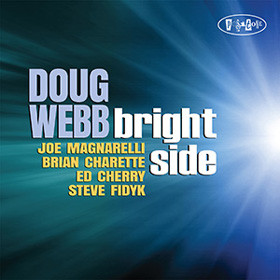 Doug Webb’s most emotional call to look on the Bright Side is a most appropriate offering in these ‘times of trouble’. In this respect, Julie Styne’s feature, ‘Guess I’ll Hang My Tears Out To Dry’ becomes the disc’s clarion call to listeners in search of peace. But let it be suggested that the saxophonist’s disc in question is an endless stream of moping about current events and an apocalyptic sermon about the state of the art, it has to be said that Webb is not one to weep and moan about it. Rather he is more apt to press on and serve up such delicacies as ‘Steak Sauce’ and ‘Funky Medina’. Making an ebullient record takes not only a sense of fun, but elegant simplicity, given to joyous celebration of all things musical. It also shows Webb to possess a more theatrically developed virtuosity necessary for a performance that highlights his compelling works. More rewarding on the ensemble front, both structurally and emotionally is Webb’s prominent interaction with musical partners who articulate the loose-limbed elegance of the music with impressive timbral variety. 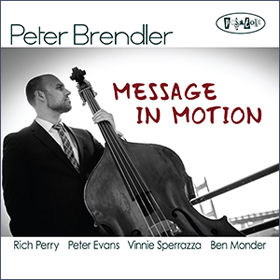 Apart from the fact that Duke Ellington did not get credit for ‘Angelica’ in bassist Peter Brendler’s Message In Motion everything else about the album suggests the impulse to adorn musical lines with an intricacy that goes well beyond craftsmanship. It is matter of imbuing musical design with depth of thought and emotion melded in with clarity and reason. Peter Brendler’s work has shown this in spades throughout his illustrious career as a first-call bassist as well as a composer. His work with pianist Frank Kimbrough and drummer Barry Altschul is the stuff that legends are made of. In only his second album as leader, Brendler not only commands the respect of musical luminaries such as saxophonist Rich Perry and guitar alchemist Ben Monder, but also trumpeter Peter Evans and drummer Vinnie Sperrazza. ‘Stunts And Twists’ helps to unveil Brendler’s compositional skills, suggesting a wonderful sense of adventure about his narratives. His introduction to Elliott Smith’s ‘Easy Way Out’ is quite breathtaking as is Ben Monder’s playing that follows immediately after, as it makes way for Brendler to re-enter with melodic lines of his own. Alice Coltrane’s ‘Ptah The El Daoud’ features an insane, dysfunctional and brilliant solo by Peter Evans, who unleashes his genius once again on ‘Very Light And Very Sweet. A truly memorable album. 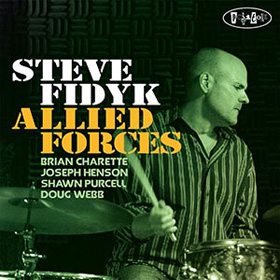 If it were time to draw up a list of the finest performances of 2016, then Steve Fidyk’s Allied Forces would feature very prominently on it. For one thing, this is not the usual organ/guitar/drum recording but an intelligent spinoff that features an infinitely larger and fascinating tonal colour palette with the addition of an alto and a tenor saxophone. The recording also shows the drummer/leader, Fidyk to not only possess formidable artistic gifts as a percussion colourist, but also a drummer of immense melodic capability. Fidyk’s musicianship also shows to be a bold instrumentalist and gifted writer. These complementary aspects paint a portrait of a musician with the facility to transform and illuminate in a myriad styles. It helps to have a sensibility rooted in, arguably, the last, and most significant idiom in Jazz – bebop. The group’s performance of Charlie Parker’s ingenious ‘Moose The Mooche’ and Thelonious Monk’s iconic ‘Evidence’ gets behind the irrepressible rhythmic dynamic of the music that Parker and Monk helped to create with Kenny Clarke and Dizzy Gillespie. But Fidyk is also a chameleonic musician. Consider the manner in which he whips up a funky storm on ‘Doin’ The Shake’. And the, of course, there’s the rousing rendition of Frank Foster’s ‘Shiny Stockings’ a marvellous bookend to ‘Evidence’, which gets things started. An album to die for.