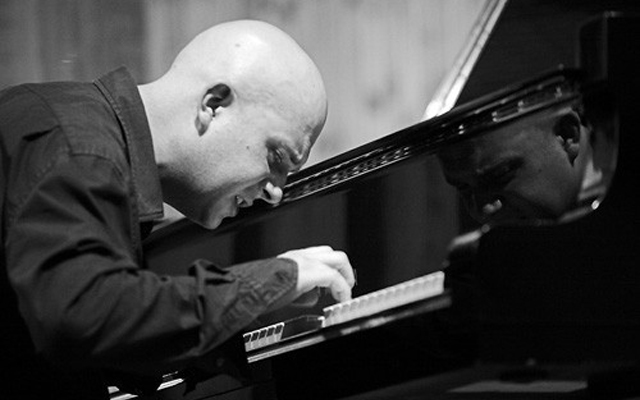 There is a certain naturalness in the pianism of Péter Rozsnyói, which is to say that the pianist does what comes naturally to him in the repertoire on Pain of an Angel. He monkeys around with articulations, shocks you with unexpected accents, balances chords in strange ways and brings inner voices – both real and invented – to the fore. He can be sensitive to a teardrop in a ballad and tear through a piece as abstrusely entitled as “Pain of an Angel” like a graffiti-artist hell-bent on mayhem, where his affectations are, at times analogous to an animated cartoon. But always from end to end on these works on this extraordinary disc manage to contain and absorb Rozsnyói’s affecttuoso style.

Of course Péter Rozsnyói may be the lead voice on this disc, but he is almost never alone. And he is indeed in splendid company with bassist György Orbán and the ineffable drummer Zoltan Csörsz, all of whom feed on each other’s insatiable appetite for invention. This means that there is never a dull moment on Pain of an Angel. However, by that same token there is never a vacuous filigreed twinkling either. The studied grace of audaciously ornamented right-hand cantabiles are supported by mannered left-hand punctuations that can turn on a dime into the steady rock drill-like ranting bar after bar until the music’s militant subtext hits home. Case in point? “The Beginning”. But it’s not always notes and phrases from some kind of dark primordial lexicographic musical testament. “Monk”, which pays homage to Thelonious Monk (naturally) transpires, sun splashed, angularly refracted and wickedly fast. The abjectly unorthodox orthodoxy of “Song for My Grandpa” is given fresh impetus as the peregrinations of the song’s melody lead one into ;ate- Béla Bartók territory.

The dynamism of “Little Song” and “Pop Song” both of which feature a certain doffing of the proverbial hat by Péter Rozsnyói – with an almost comical, exaggerated gesture – to Keith Jarrett. Neither composition suggests anything more than the two composers’ and performers’ casual, yet inescapable acquaintance. The most telling moments come in the complete seduction of “Heartbeat of a Friend who is no more”. It is as if floodlights have been dimmed and in almost operatic fashion the slow moments of aching lyricism, the rhythmic eulogy is delivered. Sensitive harmonic pointing keeps the balletic melody from collapsing, as it were, in the folding of feathers of the dying swan. Csörsz’s percussion colouring is defined by whispering of cymbals, while in the awesome, kinetic pizzicato playing of Orbán’s bass can be heard the advancing thunder of inevitable silence. The elegy remains the crowning glory of one of the finest collections of music by a piano trio.

Track List: Little Song; Song for My Grandpa; Monk; Heartbeat of a Friend Who Is No More; The Beginning; Pain of an Angel; Pop Song.