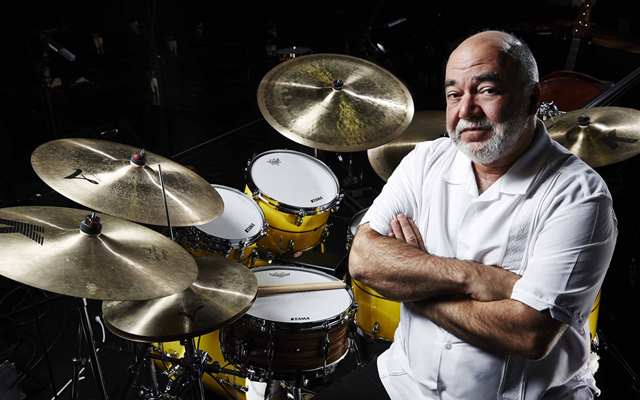 Despite the fact that the mischievous nature of this titleDr.Um an appropriate play on words for a drummer, it seems most appropriate that Peter Erskine should release an album the name of which mimics his ‘real life title’; he does, after all, have a well-earned an honorary doctorate from the Berklee School of Music. And if you have followed Erskine around for a long time you will certainly have heard him play in various idioms and in various settings – speaking many rhythmic dialogues as it were. Few drummers living today can play among almost any kind of musicians and sound as if he has belonged there forever. Not that this group is ailing and needs a doctor but thank God for Peter Erskine… every time he’s behind the drum set. 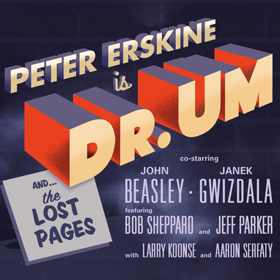 Erskine is the kind of drummer who usually speaks barely above a whisper and yet you always know that he’s there keeping the conversation going, spicing it up when tedium sets in, drawing in a reticent musician, changing the dialogue when that needs doing. You can feel the whole earth heaving when he wants to shake things up but he does that in such a manner that a musician is roused up to a greater level of playing. Erskine has flawless talent and that actually goes without saying. He may not dazzle in virtuoso ways, but he is so beautifully and dangerously quiet that you are forced to hear everything that he is doing with the drums. It is then that you hear just how masterful he really and truly is. Weather Report and Jaco Pastorius did and that’s saying a lot, but there has always been more to Peter Erskine than that.

This album, Dr.Um is an album that exceeds perfection in every sense of the term. Erskine has muted serenity in everything that he does, whether he is coaxing the skins to sing, or the cymbals to hiss and clash the air around his set. He is expressive although he plays with a kind of private devotion. That’s probably because Erskine is an obsessive perfectionist who polishes his work into gleaming gems. As a composer who plays the drums he writes for the instrument and others around him, idiomatically and yet he is never flashy, unlike his more flamboyant younger contemporaries. And then after presenting this music to his group he contributes to it with wonderfully clear and light, but always self-effacing playing. This is what makes the album so delightful and flawless from end to end. I would even be remiss to suggest that one track stands out better than another.

The five or so members of his group parley with the familiarity of old friends, yet their playing always retains that sense of gracious etiquette associated with the noble academics of a well-oiled machine/group for which the music is intended. Nothing is forced or exaggerated or overly mannered – all seem effortlessly and intuitively right. The drum sound is lucid, the keyboards, bass and guitar add warmth and continuo. These individual parts are, in sum, sincere and poised accounts, a fitting tribute to the chaste and faultless character of the composer and his music. And the recording has been exquisitely engineered as well. What more could you ever ask for?

Peter Erskine has played the drums since the age of four and is known for his versatility and love of working in different musical contexts. He appears on over 600 albums and film scores, and has won two Grammy Awards, plus an Honorary Doctorate from the Berklee School of Music (1992). Read more…