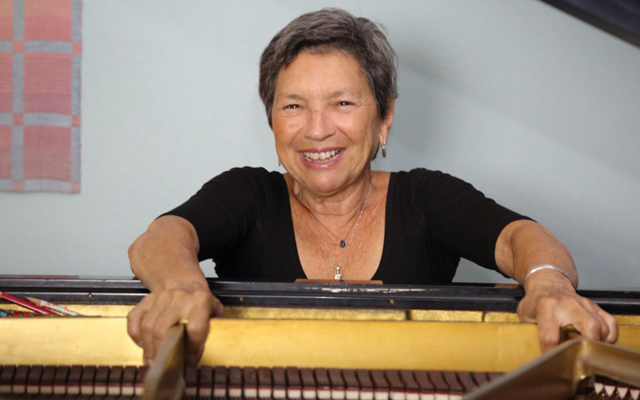 This is the thirteenth recording by Peggy Stern, whose music has somehow survived the aural ephemera of dew time. And having hovered as mysteriously as music does, we know not where, it arrives upon our inner ear, densely quilted with flute and trombone, clarinet, cello, bass and drums, sewn together, as it were, by Stern’s erudite pianism. (And on two of the ten magnificent songs it features the dramatic vocals of Suzi Stern). The ten individually titled pieces somehow lock in to a three-quarter-of-an-hour suite possessed of such tactile power that we are happily abducted into its world by the Z Octet, led not so much by both mind and heart. 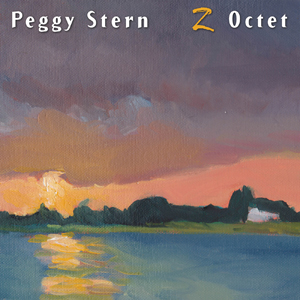 Ordinarily there is nothing wrong with music that attracts the ‘cerebral’ aspect of our nature, but the naked emotion of this music by Peggy Stern captures more the visceral elements that abide in us leading us as listening interlopers into a musical realm we almost cannot inhabit consciously. Stern is a canny writer, whose skill seems to derive from unprecedented leaps of faith into the dark depths of music’s secrets. The lines of her melodies spring not so much from logical consequences of musical modes, but more out of a sense of the courtship of danger in a wild, elemental environment. Perhaps the suggestion that Peggy Stern inhabits the musical arts in a trance-like state (when composing) might be too assumptive, but it is also the likeliest explanation for how music such as this comes to be; that, and the fact that it has also been distilled, we are told, by working at it for more than a decade.

Peggy Stern – the composer – favours flowing tempi, yet there is an even greater sense of spontaneity and elasticity in the manner of Peggy Stern – the pianist. ‘Time @ Time/Hymn’ a gorgeous interpretation of a 1940s standard ‘Time After Time’ illustrates so beautifully how this process of thinking is turned into performance. The sense of serenity here is ethereal. However, one suddenly becomes aware of a growing sense of ebullience. It’s heralded subtly at the beginning, as liquid streams of quavers gather into a gentle cascade, and reaches fruition only in the coda, which surges exultantly. In between, though, there’s an ebb and flow, a multiplicity of swirling currents that are somehow contained as an uninterrupted, unified body. Listen also to the two movements – ‘New Year’s’ glorious in its meditative beauty and ‘Caterina/Isabela’ – vocalised by the ineffable Suzi Stern, where instruments trade searching, syncopated melody and breathless accompaniment. All musicians imbue this intertwining dance with tender intimacy, and the resulting feeling of anticipation is exquisite.

Throughout the performance one is truck by music that does not have a big, fat, voluptuous sound; it’s on the lean side, but nevertheless focussed, gleaming, capable of spreading much colour as if on a very wet tapestry. Notable, too, is Stern’s eloquent use of portamento almost instructively and every once in a while, as she moulds themes so elegantly and then, more impressively still develops these into musical adventures that feel so heartfelt and noble. This is music possessed of great explosions, bristling rhythms, dynamic contrasts starkly illuminated, and with unrelenting dramatic thrust. It is a record to die for.