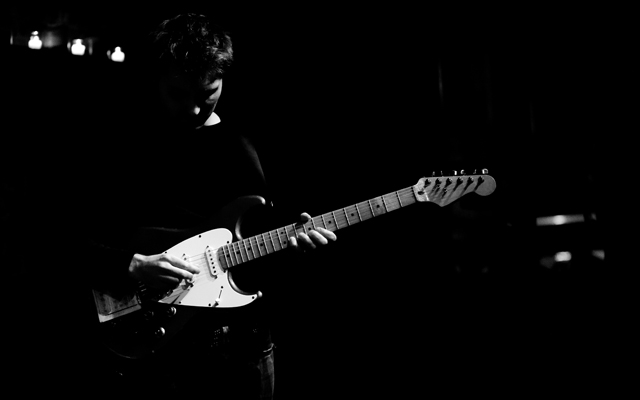 Pawel Ignatiowicz is a gifted multi-instrumentalist, but his entire recorded output so far has been documented playing the guitar However, if one listens carefully to his music one can easily discern that his playing is, in fact – and quite magically – a sound world that is made up of horns and reeds and winds. The fact that he can evoke this enormous acoustic range on a single six (or twelve) string instrument is proof of just how incredibly unique his palette of sound really is. Moreover, playing in a completely “conventional” manner – i.e., manipulating strings to play single notes and chords – he is able to create a kind of orchestral effect on just one instrument, which makes his a rather unique voice on the modern guitar. 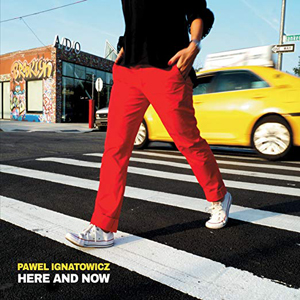 This album Here and Now gives notice of all of his skills almost immediately as he opens proceedings with “Facing West”, playing a short sequence on the acoustic guitar before following up the introduction with a statement of the theme on a guitar synth before the song begins to unfurl with petal-soft, single horn-like melodic statements played on the electric guitar, finally exploding in full bloom into a series of choruses that ripple with musical inventions. Here the sonic palette is opened as if taken apart by fingers that extract every kind of sound from the guitar even going as far as to use distortion and noise. Thus in just one song we get a sense of the enormous breadth of Mr Ignatiowicz’s playing. This erupts in nine other songs that follow this one, each informing the listener that a bright young musician has arrived just four discs into his repertoire.

But Mr Ignatiowicz does not reveal his cards all at once. The “reveal” so to speak is a slow and seductive one with song after song being unveiled as if being taunted in an interminable, veiled Salome-like fashion as Mr Ignatiowicz enacts this musical theatre to finally reveal his quiet, dreamy, intimate instrument. In doing so Mr Ignatiowicz has joined positioned himself along with Harvey Valdes, Gustavo Assis-Brasil and a few others at the vanguard of a group of young guitarists giving a fresh and much-needed lease of life to their instrument. Along the way, almost without so much as breaking a virtuoso sweat, Mr Ignatiowicz charms his way into the listener’s sensibilities with an impressive repertoire of music.

Individual, inspired, original and always daring, Mr Ignatiowicz has managed to enrich the repertoire of guitar works with music such as the forbidding harmonic progressions of “Darkness at Noon”, which appropriately raises the ghost of Arthur Koestler’s seminal novel, the broodingly percussive tumbling groove of “Come and Go” with his adventurous (electric sitar) duet with Jonathan Singer on tabla and the rippling, hypnotic groove of “Open Skies”. In all three songs and elsewhere other musicians also keep proceedings fresh and innovative. Pianist Julian Shore, bassist Edward Perez and the inimitable drumming wizard Ferenc Nemeth with their outward-looking perspectives also remain completely attuned to Mr Ignatiowicz’s artistry and vision, as all undertake this exciting musical journey with him.