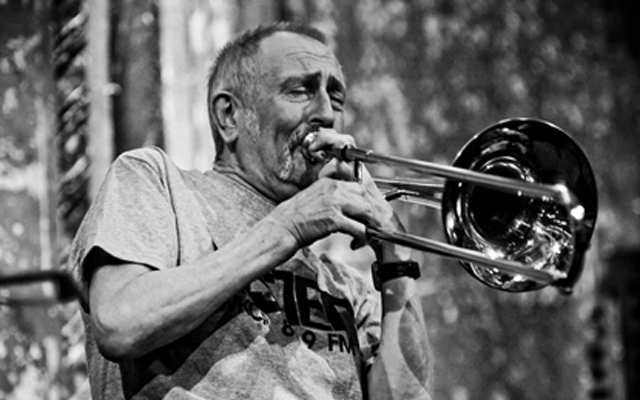 There is a magnificent ‘thumbing of the nose’ at the ‘backward times’ of Thatcherism and Reaganomics and the totalitarianism of men like Pinochet reflected in the poignant liner notes to this release in Backward Times by the legendary Paul Rutherford. But what Mr Rutherford celebrates in grand, breathtaking manner forms a sort of central theme of human liberty that runs throughout the music of this disc. It would seem that in all of the performances, no matter who he is playing with, Paul Rutherford seems to be rejoicing in the empirical fact that it is by means of music that the individual breaks free of every shackle – factual or metaphorical.

This music – whether solo, duo or trio – luxuriates in the fecundity of unique free improvisations that mix recognisable trombone lyricism with an abundance of oscillating electronic whistles, white noise, wet, mouthy smooching and other vocalastics and multiphonics from breathing, speaking and singing into the mouthpiece of his instrument. On “Duet for Two” and “Trio Finale” – performed nearly twenty years apart – Paul Rutherford is joined by Paul Rogers (an old colleague 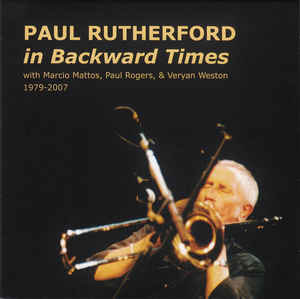 from the earliest days of experimentation), and by Veryan Weston (another iconoclast), together with the brilliant cellist Marcio Mattos. No matter what configuration, the listener is led slowly through ever-changing musical scenery, viewing magical sonic landmarks from constantly changing perspectives.

Through it all the music unfolds in a moving interplay of man and instrument (or instruments, depending on which of the pieces you are listening to here). The shifting relationships between musician (and musicians) and instruments seem to evoke the massive natural forces that shape the humanity of its time. Sometimes this stacks up like a massive edifice and at other moments – especially in the “Duet for One” and “Solo for One” pieces the music thins to the most diaphanous textures, but always there is the sense of returning to the same viewpoint. On top of these seismic musical processes, Paul Rutherford creates (and facilitates) a virtuoso instrumental superstructure whose riotous details suggest the teeming surface of human life in its various triumphant stages in all its protean variety.

It is hard to believe that it is a decade since Paul Rutherford’s passing. This disc, then, is a timely reminder of his musical legacy; a worthy tribute to one of the great musical masters of our time.