And now there is this album, Whahay, brilliant and audacious in its attempt to re-create this music in all of its glory. Audacious because bassist Paul Rogers, tenor saxophonist Robin Fincker and drummer Fabien Duscombs have attempted to play music that too in excess of a quintet (sometimes) to express the ideas ensconced in Mr. Mingus’ music. Remember that Charles Mingus’ canvas was vast and encompassed the music of Africa, the Americas and Europe as well. This is perhaps one of the best reasons to recommend the music of this album. Whahay is performed as a mighty musical coat of many colours, using a palette as dramatic and fabled as Joseph’s Amazing Technicolour Dream-coat! Many Jazz musicians of the 40’s and 50’s and indeed even today have always imagined their music performed in the likeness of European music. In many ways Epitaph Mr. Mingus’ magnum opus was such a composition. But how do you create a symphony of music and a musician immersed in the blues? This trio does not believe that you have to. They have used the influences of Webern, Stravinsky, Schoenberg and Stockhausen to interpret Charles Mingus’ music. The freedom of Mr. Mingus’ swing is “replaced”, if you will, by the freedom of 12-tone technique, serialism and minimalism of modern European music. The beauty of space, sound and silence is a thing of beauty here, which is something that Mr. Mingus coincidentally also admired. How extraordinary to pay tribute to Charles Mingus that to make sacred the sound and silence of his music and to do it with the same freedom as Mr. Mingus played his own music?

Finally, there is the small matter of negotiating the bass, Mr. Mingus’ instrument. This is where Mr. Rogers must tread not gently, but almost with controlled aggression. He must take chances. The bassist does a remarkable job of this. Paul Rogers is a great virtuoso. His playing—whether pizzicato or con arco—is impeccable and, like Mr. Mingus’ own playing eschews style for emotion and tastefulness for an almost eccentric form of dynamics. Like Charles Mingus he is a true seeker; someone who expresses a certain hunger for music. This is why his bass playing and, indeed his music, were larger than life. Paul Rogers also understands what it means to play music this way. More than any other bassist Mr. Rogers has the wherewithal to make music with as much power as possible. This is important when playing the music of Charles Mingus: to express power and authority as well as to play it gently and with tenderness. Mr. Rogers’ dynamics are sublime. And he has an uncanny understanding of what works on his considerably refashioned instrument. His soloing is brilliant throughout. And his management of emotion and mood is exquisite. The elemental beauty of “Goodbye Pork Pie Hat” testifies to that. Most of all Paul Rogers has the kind of intuition that enables him to “see” this music through the eyes of the principal character of this music: Charles Mingus himself. And throughout Mr. Rogers has been insightful and full of surprise in his reading of Mr. Mingus and his music. Small wonder then why this record recommends itself, which is much for its music as well as for the ingenuity of its bassist.

In 2012, Paul Rogers contacted Robin Fincker for the creation of a trio around themes by Charles Mingus played freely within improvisations. From this starting point, the trio conceived a « musical suite », performed as one long piece directly drawing from the music of the great American composer whilst being filled with the liberty-takings of European Jazz. Whahay – an homage to the joyful exclamations dear to Mingus’ titles – was born, a trio manipulated by three actors of today’s improvised music scene, capable of combining the lyricism of the blues with noise Improv, and implacable grooves with the most exalted Free-Jazz. Read more… 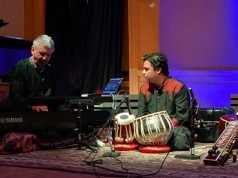