Home Music Oddjob: Folk
It is, perhaps, easy to be a bit misled by a name such as “Oddjob”. One is apt to take its meaning literally – especially in North America where – to put it bluntly – attention-spans are short and that too, not only among millennials. Oddjob is a mighty ensemble and its name is reminiscent of dry Northern European humour (Another, band from the Netherlands – Talking Cows – also comes to mind). But more to the point, this quintet puts a singularly unique and wryly humorous spin on the most universally spoken language of music – that of the herdsman. 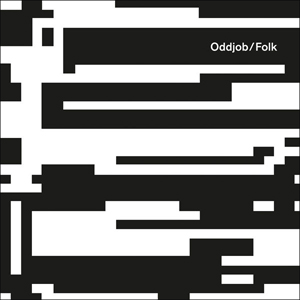 Folk we see Oddjob heading into the countryside of their childhood and making friends, afresh, with cows and goats and others members of our fellow animals in the Swedish countryside. For those of us who’ve long been admirers of Swedish (indeed Scandinavian) culture this is an epic journey of sorts. It is a bewitching; a beguiling journey. You can hear a sense of freedom in their “voices” as the >members of Oddjob mix folk calls into what they have called “Folk” music, enumerating each of the seven tracks as you would a field recording. (In fact, Caprice Records did release the field recordings upon which these magical tracks are based as Lockrop och Vallåtar [CAP 21483], for the ethnomusicologically-inclined).

The elegance of the musicians’ playing here from the elemental wailing of the sopranino saxophone to the rumble of the ruggedly earth-toned contrabass and the fluttering arpeggios of the piano – each melody and its harmonic and rhythmic twin becomes part of a natural landscape that mixes beauty and danger, and the ghostly suggestion of animal-sounds. You would be hard-pressed to find to compare with the brilliance of these suggestively peripatetic musicians and although each member of the quintet “delivers” on chops, the incumbent weight naturally falls upon Per “Ruskträsk” Johansson and Goran Kajfeš, who are the all-important “horn-men” for this project.

Also integrated into “Folk #2” for instance, are some elements of field recordings. Here Tjugmyr Maria Larsson gets her goat-calling on… Whether evocative of freezing nights, or long rainy days, each track takes us into some wild place with trusted and inspiring musical friends.