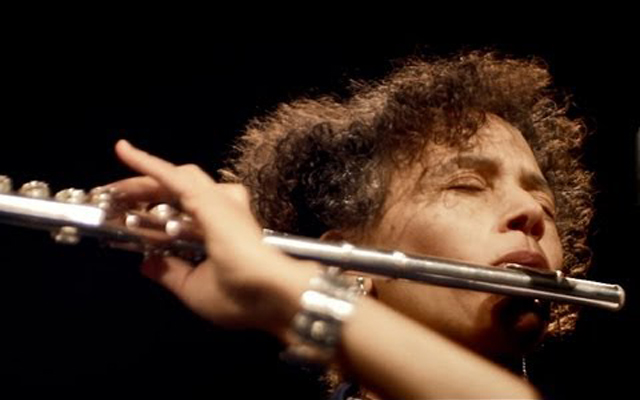 This magnificent composition by Nicole Mitchell Mandorla Awakening II – Emerging Worlds looks less like science-fiction and with each hearing it becomes more and more like cautionary “tale” (also the wrong word). It is not opera, but it is operatic, a sprawling music drama of Wagnerian proportions, much like a life-altering Der Ring des Nibelungen experience. Moreover, although set in 2099, its reality is more in the “now” of our times and you can almost “see” its location, somewhere is a fertile Africa, to which, I’m sure we will all have to return to when we are called to account for ourselves. And if we awoke from 1984 to find our waking moment “captured and sold to the highest bidder” in one scandalous hack of a computer after the other, it is entirely conceivable that tomorrow is today, the future is the present our past has all but been jettisoned – sold to a museum of Humanity that is now, just like our world, in abject decay.

It is then that we are introduced in this music of Nicole Mitchell’s Black Earth Ensemble, to Mandorla Awakening II – Emerging Worlds, and, in the flagging spirit of the music’s “Adam” and “Eve” we too are drawn as if by Die Zauberflöte played by Mitchell, led Pied-Piper of Hamelin-like, in the aftermath of the “Egoes War” to the gates of Eden – in other words, to “Mandorla – the Emerging World”, which we are now sure is back from whence we came: Africa, though now fertile, restored to its epic beauty before it was raped by the long-dead European colonists and now inhabited by 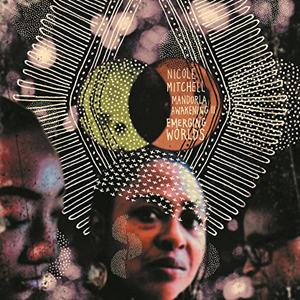 a Mandorlian Humanity – the future/now selves of the enlightened ones. Now a war of a different sort is being waged – the war of the inner spirit, which yearns for the decadence of the old world order. But there is nothing but death there, if we return. So we must become transcendent beings, Mandorlian, or die.

Unreal? It’s not hard to see how real this really is. After all the musical score of this high-drama is visceral palpably real. It is felt by the listener in body and in soul, or as is written in the epic lyricism of Nicole Mitchell’s notes, the duality of mind and spirit “The Chalice” captures this masterfully, as does the “Dance of Many Hands”. We must surrender “the proverbial blade” and embrace the chalice or else… Only then can we obviate the necessity of going the old way of the “World Union” – by “Listening | Embrace Forest Wall | TimeWalk”; make the leap into “Mandorla Island”. This music feels like vespers, only now the imperatives are before us in the form of Mitchell’s lyrics and avery r. young’s recitation of them.

Musically Nicole Mitchell’s Black Earth Ensemble does what a symphony would do. Mitchell’s electronics weave the backdrop of the Mandorlian tapestry, along with the high and lonesome wail of Renée Baker’s violin and the contrapuntal voice of Tomeka Reed’s cello. The flute and shakuhachi together with the guitar, bass and the shamisen and the rolling thunder of the taiko drum and percussion are interwoven into that diaphanous fabric of the “TimeWrap”, enrobing the new Mandorlian believers, swathing them in the love and warmth of the Mandorlian sun. You are invited to enjoy the glorious spectacle. It’s hard not to fall under the spell of this Wagnerian epic. Only it isn’t Wagner’s time anymore, but time for Nicole Mitchell’s Black Earth Ensemble. So be warned; and don’t just observe; take notes. Believe…