The unrelenting intensity and grueling length of this global viral pandemic may have shut performance stages down worldwide and also shuttered many musical businesses too, but it has also – quite contrarily – opened the sluice gates of creativity and forced artists to think of and in new ways to have their say with the audiences that are starved for the beautiful distraction of art.

Often the artists’ inspiration comes from the pain and longing that this very isolation has caused; a separation from his or her audience that has negatively affected both artist and audience. The multi-instrumentalist Nick Peck is no exception here. 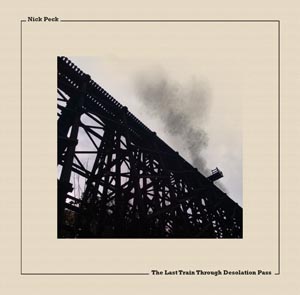 Moreover with the extraordinary depth of his background in music and the dramatic arts, the skills of which were honed both in the conservatoires of Canada and Guildhall in London, Mr Peck capitalised on both to tell a compelling story of the loneliness that almost everyone across continents has – and continues to – lived through.

The result is The Last Train to Desolation Pass a nearly hour-long contemplative work in five parts that is rooted in the landscape of the country of The North American Rockies that is part narrative and also part tone-poem with a sweeping arc that is reminiscent something like Jean Sibelius’ Finlandia. Performed by overdubbing himself in performances on an array of instruments along with Ben Lockwood on flutes in parts II, III and IV, Mr Peck’s travelogue to the bleakness of Desolation Pass is all about clarity – of rhythm, of texture, of intention and voice. It is zealously unfussy and entirely without exaggeration. It can stop you in your tracks with both its simplicity and its grandiosity.

The “no-man’s land” we enter in the last movement makes for a profound moment or two of reflection into the metaphorically barren landscape of “desolation” can rarely have sounded more like Sibelius’ “pure Spring water”. But in the suddenness of the hush after the crescendo of Part IV [and at the end of the performance] Mr Peck manages to change the way the very air moves in the room where you are.