Home Music New Faces: Straight Forward
There’s good reason why it’s not hyperbole to be talking of the ensemble New Faces in the context of The Jazz Messengers and VSOP. The Jazz Messengers and VSOP may have been composed of musicians who were already iconic at the time the ensembles were formed. And while the musicians of New Faces have yet to attain such glorified status, each of them is certainly a prodigiously endowed musician. Members have written half of the eleven songs; as writers each of the musicians has contributed to what promises to be a potentially long library of repertoire in the book of a remarkable group, if they continue to perform together which may be a distinct possibility considering that all of them work consistently with Marc Free, a busy – and rather inspired – on the West Coast.

Marc Free and his partner, Nick O’Toole, who is an engineer, both have discerning ears and enough financial muscle to have created Posi-Tone Records, an imprint that has consistently fostered an enviable collection of recording dates which have, in turn, resulted in very fine music by a small group of artists. Each of the artists of New Faces has made at least one album released on the Posi-Tone imprint. 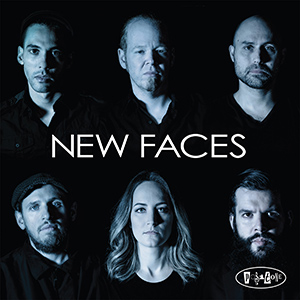 This the first time they can be heard forged in the bond of a sextet. Like those old, bands mentioned earlier – especially VSOP – each of the musicians here already has a considerable reputation, with Roxy Coss being heralded as something of a “talent deserving” of a wider reputation. As it happens every time Miss Coss puts the reed of her tenor saxophone to her lips she not only lives up to her well-earned reputation, but far exceeds expectations.

Roxy Coss demands the listener’s attention with the gorgeous, sinewy tone and colours that she brings to her playing – especially beautiful on “King Cobra”. She provides a perfect foil to the intense majesty of Josh Lawrence’s horn and the radiant high-jinx of Behn Gillece’s vibraphone which are heard to great effect everywhere but most pointedly on the churning power of “Vortex”. Theo Hill’s music is, as I once noted, “alive with intelligent nuance, stylish surety and tonal allure”. His rich harmonic excursions also draw a might response from bassist matchless Peter Brendler and Vinnie Sperrazza, an authentic percussion colourist if ever there was one. And because each of the musicians here is a selfless one, who puts self-esteem aside for the greater good of the ensemble, the result is these performances which have been recorded with precision and in the warmth of a remarkable, dry acoustic by Nick O’Toole and the ubiquitous Michael Brorby.