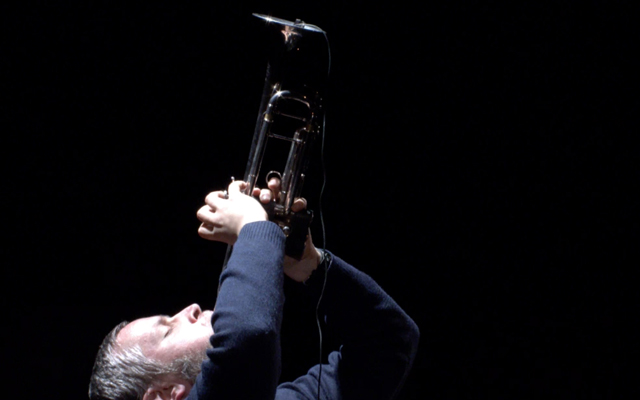 These four discs representing The Complete Syllables Music by trumpeter Nate Wooley is a moment worth savouring, even before listening to the first “utterances” of “[8] Syllables” on Disc One. But the deep breath taken by Wooley before uttering a single sonic syllable of word is radically different than the deep breath taken by the listener. The breathtaking for the trumpeter is a matter of life and death, every syllable being uttered as if it were his last. The breathtaking of the listener is wonderment at the audacious risk by the trumpeter – Nate Wooley.

Thus the act of describing the experience is next to impossible, because it takes a whole new vocabulary to undertake a report on the performance of these works. So, begin with Wooley’s excellent booklet notes; then the abdication of one’s comfort zone is de rigueur in order to follow Nate Wooley and his performances – ‘readings’ might be a more appropriate word – of “[8] Syllables”, “ [9] Syllables” as well “For Kenneth Gaburo”. Their scores are better discerned in the whispers, shrieks, smears, silences and other sounds and noises that escape the bell of the trumpet. 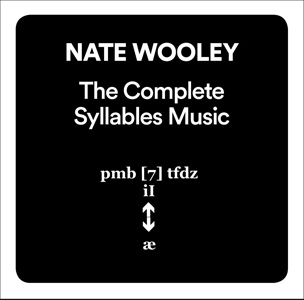 If the beauty, or even ugliness of these sonic images is anywhere near obvious, which it isn’t (not at first at any rate), then the question of how exactly to interpret Wooley’s undulating note-extensions, silences, and disembodied note heads as sound is left hanging.

Forget about those who sneer at through-composed scores. Even graphic notation refusenicks invariably raise the objection that no matter who the composer, graphic pieces sound unmistakably of a type (graphic notation bring notation that replaces notes, bars and staves with symbols, charts and/or diagrams). – even those inhabiting the outlying edges of the periphery left to their own devices will, the argument goes, invariably default to doodling approximations of sounds, phrases lines and other stock figurations. But never have I heard music like this before, which would suggest that Nate Wooley has refined his non-notation or even graphics to the point where the only relevant “music” (for want of a better word) exists as sound/word/noise, all of which come together to form a new vocabulary for the trumpet.

From the addition of amplifier to trumpet in Disc Two, Nate Wooley adds tape manipulation to trumpet on Disc Four. Here it gets even better in “For Kenneth Gaburo” – discs three and four of this box-set. By now the seemingly random human sounds made by manipulating tongue, hard and soft palette, inner cheeks, lungs, larynx, pharynx and other elements of the body that make human communication possible, Nate Wooley creates a new language from the sound and silence that is made possible by letting the breath escape his lips. Thus we have a trumpeter’s “voice”, if you like, put to use to communicate his reverence – in this instance – for Kenneth Gaburo, the American composer who often made innovative use of electronics and explored tonality, serialism, and what he called “compositional linguistics” such as in his LINGUA (Listening) series.

Now, listening to Nate Wooley, you become aware of the intensity of “listening” from these alert and sensitive whole or broken accented “sonic-grams”, silences, elongated or abbreviated sounds, phrases and lines. And you tiptoe towards orienting yourself around a structure that has almost fully revealed itself, gradually building a network of association by continually spinning a feeder pool of sound-words into fresh contexts, mashing up the permutations and altering the perspective between foreground and background as Nate Wooley brings this series of syllables and ‘sung’ human speech to its monumental conclusion. It is then time to realise that it is, however, just the beginning…