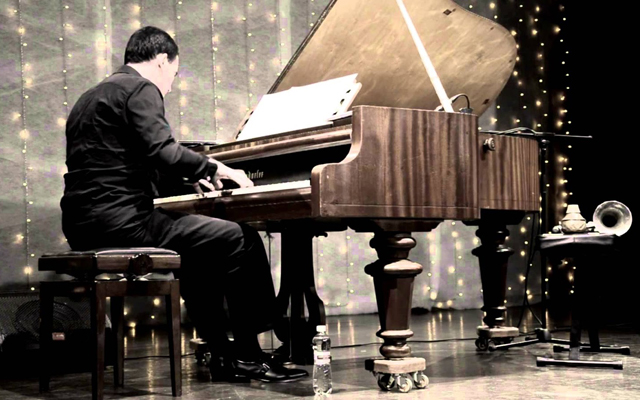 Spring Feelings is pianist Misha Tsiganov’s second disc on the Criss Cross imprint. His first was a set of standards relocated to his personal landscape. Moving things in a different direction, Tsiganov brings five originals to this date and it is not a tentative move at all. On the contrary we find a pianist who is supremely confident in his own skin as a composer, and much more so as a pianist. His style is somewhat chameleonic; spare and lean when he needs to be and lavish when the music calls for it. Both pianist incarnations, however, are entrancing and somewhat revealing. Tsiganov had acquired quite of a reputation for his music that was part of Hendrik Meurkens’ American band. 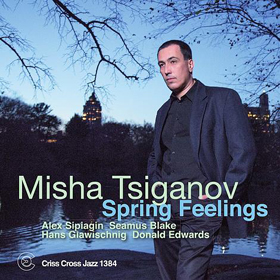 Misha Tsiganov’s music is somewhat in the vein of Bill Evans – demanding, energetic and wonderfully lyrical. It is driven, but never overblown, struggle-ridden, but never seeming to try too hard. The immediacy of Tsiganov’s musical language is appealingly immediate. It traces life’s experiences from his origins in St. Petersburg, Russia to current residency in New York, where he has ‘made it’ as a pianist of great repute. Every note brings to life the excitement of discovery. The halting, fragmentary note patterns in the opening movements of ‘October in Kiev’ reflect the first tentative steps that a musician takes upon beginning a musical trek in Ukraine. The lyrical music of ‘Blues for Gerry’ and ‘Spring Feelings’ seems to be a hymn of emotional idealism. In contrast ‘Jumping Michael’ has a more aggressive character, perhaps befitting a portrait of its subject.

The simplicity and immediacy of Misha Tsiganov’s musical language, not far removed in character and spirituality to the sound world explored by pianists such as Evans and McCoy Tyner, and even a more adventurous pianist such as Leonid Chizhik, which makes works such as these on the disc so appealing, particularly when performed by Tsiganov with a stellar cast including trumpeter Alex Sipiagin, tenor saxophonist Seamus Blake, bassist Hans Glawischnig and drummer Donald Edwards. It is also interesting to hear the pianist’s own works alongside those of Wayne Shorter – ‘Infant Eyes’ and ‘Yes or No’ – as well as other composers of American Standards. Each of the songs on this album echoes with the elegance of a musician who is fast becoming recognised as one of the important pianists of his generation.

Track List: You and the Night and the Music; Jed’s Place; October in Kiev; Yes or No; Jumping Michael; Infant Eyes; The Night has a Thousand Eyes; Blues for Gerry; Spring Feelings.