Listening to the music of Milo Fine I am hardly surprised to recall that line from Manoel de Barros among others from his celebrated book. There is poetry in the music that Fine plays. It echoes in straight, angular and jagged lines that make up the pieces that he performs; pieces that he and his musical partners will often announce with a melodic idea, then promptly cut into pieces what follows; or juggled it like glass, airborne before it is left to shatter tunefully amidst them. Nothing is discarded. Not a moment in time, not a shred of a note or its echo; not even the air disturbed by waving of the hands as Fine beats his drums; not even moments of outstretched in silence.

These are moments worth savouring, because discs documenting work by the American contemporary composer and multi-instrumentalist (that’s quite another discussion and feature altogether), Milo Fine come along quite rarely. And when they do, you will be in no doubt that the aim of Milo Fine is to move musicians and music beyond what he perceives as the comfort zone of conventional notation, or even improvisation. 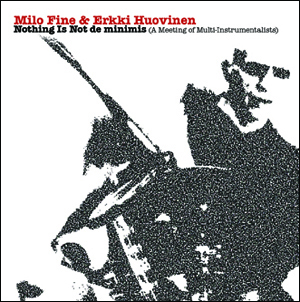 Rather the music he offers in studio or stage performances suggests ‘readings’ – a more appropriate word that expresses the sequences of colour etchings in his pieces.

There is an abstract – and often concrete – beauty in Milo Fine’s imagery and you can hear it in his music as I did on Nothing Is Not de minimis (Insides Music, 2011), with Erkki Huovinen, a Finnish horn, keyboard, strings player and pedagogue; or in the many recordings he has made with the guitarist Steve Gnitka especially this one with his Free Jazz Ensemble (and also includes excellent guest performances on cornet/flugelhorn from John O’Brien, and percussion and breathtaking vocalastics by Viv Corringham): You will not be pressed to buy (Shih Shih Wu Ai Records, 2012?), and certainly in the very inebriating More Carvings (Ongoing celebrations of insignificance) (Sporadic Tangible Documents – a division of Shih Shih Wu Ai Records).

All the music that Milo Fine makes might beg the question: How exactly to interpret his fracturing lines, sometimes disembodied note heads as sound may be left hanging? Free improvisation refuseniks invariably raise the objection that no matter what the music, performers are left to their own devices and therefore, 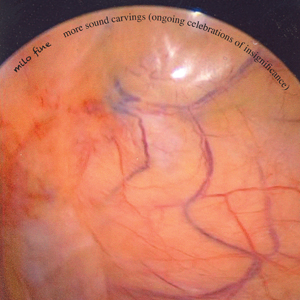 the argument goes, invariably default to doodling approximations of imagined ideas and other stick figurations suggested or implied by Fine.

But never have before I heard music like Milo Fine makes, which would suggest that Fine has refined his improvisational ideas and methods for a deeper psychological impact both on musicians and on listeners than perhaps even they realise. Instantly you become aware of an intensity of listening from these alert and sensitive players – winds, strings, keyboards and, of course, percussion – as players tiptoe towards orienting themselves around a structure that is yet to reveal itself. That distinct concentration and energy which derives from the musicians’ feeling, rather than from ‘reading’ their way forwards is the whole point of the music of Milo Fine. 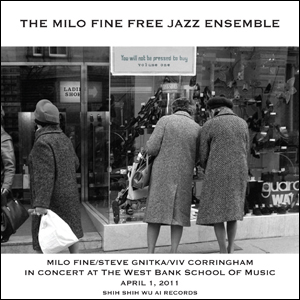 Milo Fine’s improvisational schematics (evidenced on the “Upstairs” and “Downstairs” sequences on Nothing Is Not… and the alphanumeric titles on You will not be pressed to buy) build a network of association by continually spinning feeder pools of sounds, bold lines, scattering of dots, architecturally centring circles – into fresh contexts, mashing up permutations and altering perspective between foreground and background. Thus various versions of “Upstairs” and “Downstairs” around piano, marimba and alto clarinet by Milo Fine (foreground) and guitar, alto clarinet by Erkki Huovinen (background) shifts spatially, exchanging positions as the music coalesces and begins to feel explicitly composerly. Add to all of these marvels on the music of Milo Fine, played by him, Steve Gnitka, John O’Brien and Erkki Huovinen – as well as sung by Viv Corringham – on these discs, are the radiantly delicate textures that come alive throughout; a welcome assault on the senses.