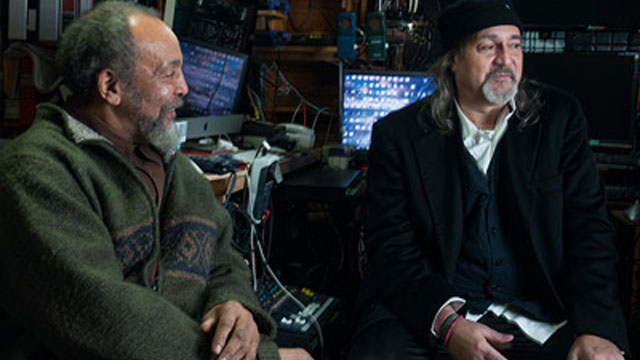 This is a glorious disc. Simply glorious. Milford Graves and Bill Laswell have been affable bedfellows and the percussion colourist’s and the bassist’s playing here is compelling on many levels. To start with there’s the sense of sharing the sheer physical thrill of the drum-and-bass interaction. That is particularly evident in the growl and rumble such as the fierce and brilliant improvisation of “Eternal Signs” that concludes the deeply reverent track “Sonny Sharrock” that, in turn, melts in the blue flame into the sub-atomic vibrations of “Another Space”; its frugal prelude and the outer sections that roar in the final dénouement of the song, enthralled in “Autopossession”, which shifts into the fourth, spectral dimension, and then swings back in the energy of the chart that suggests the energy and waveform that might have been captured in a particle accelerator rather than by the consoles in the sound-engineer’s booth. Common to all this is a sense of being fleet, but never breathless, with time enough for textures to tell. 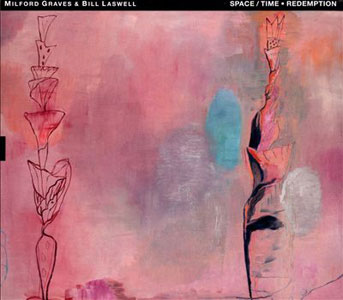 At every turn you get the sense of the musicians flexing their improvisational muscles in the early part of the disc. There is a sense of the drummer and the bassist demonstrating just how much mind craft they could introduce into a composition built around the common elements of intuition and improvisation throughout the remarkable recording; the collision of these minds that very much occupies each other’s worlds in terms of mood and swing. Thus there’s a palpable delight in the rhythmically extravagant theme from which the first chart is fashioned and the drummer and bassist’s way with the dancing double-helical structures at once strong-jawed and supple. We are always aware of the re-entry of the body of the shard-like elements of the chart as they peek through the texture in different registers or reappears stood on its head, yet it’s never exaggerated as might sometimes be the case in the hands of lesser improvisers. And how much can Mr. Graves and Mr. Laswell dance—at least on drums and bass—throughout the introduction and body of “Another Space”, urged to life through the subtle dynamics, voicings, articulation and judicious ornamentation. A very different kind of dance reveals itself in the outro of this piece, a kind of musette in which Mr. Laswell takes a graver view of things in the sonorous drone effect contrasting delightfully with the tripping rattle and hum of Mr. Graves’ drums. The way these two musicians have considered the touch and dynamic of every phrase would suggest that these are improvisational readings that constantly impress with fresh ideas and details each time you hear them.

Even the apparently unassuming numbers such as the melodic waddling of the mid-section of “Autopossession”, the piece later gains a sense of intrigue as Milford Graves re-examines them from every angle, again bringing multifarious shadings to the music. And it all flows effortlessly—though I’m sure the journey has been anything but that. Highlights abound: in the murmuring of the snare towards the middle of the piece. This is followed by one of the most extraordinary rumblings of the tom toms and the bass drum I have ever heard, daring you to enter the world of Space/Time · Redemption as the grandiose sonorities of the bass become more and more withdrawn. The whispered intimacy extends into Mr. Laswell’s insertion of an ornamented figure into the sequence that follows. “Another Time” proves to be a masterclass in audacious playing, yet never burdening the melodic lines. In fact the effect here is truly spectacular. Are there any caveats? Fittingly there is a long silence before the song ends. Some might find that the song has a pulse that is a tad irreverent. To me this works precisely because the musicians tease so much out of each line. They have spiritual intensity that draws you ineluctably in without any of the musicians’ wilfulness. You can be in no doubt of the thought that has gone into this enterprise, from Milford Graves’ rumbling ideologies to Bill Laswell’s harnessing the power of the bass. Together these two musicians shine new light on improvisational music to mesmerising effect, all of which is captured by a warmly sympathetic recording and an engaging booklet. So let’s cherish this one.

Over the course of some three decades, visionary bassist-producer Bill Laswell has been one of the most prolific and restlessly creative forces in contemporary music. A sound conceptualist who has always been a step ahead of the curve, he has put his inimitable stamp on nearly 3,000 recording projects by such artists as Mick Jagger, Yoko Ono, Iggy Pop, Laurie Anderson, Brian Eno, Bootsy Collins, Nine Inch Nails, Motorhead, Peter Gabriel, Blur, The Ramones, George Clinton, Pharaoh Sanders, The Dalai Lama, Matisyahu, Angelique Kidjo, DJ Krush, RAMM:ΣLL:ZΣΣ, Sting, The Last Poets, Afrika Bambaataa, Julian Schnabel, Whitney Houston, Manu Dibango, Fela Kuti and most notably Herbie Hancock, who collaborated with Laswell for the pivotal 1983 smash-hit single “Rock-It” which introduced scratching to the mainstream, inspired a generation of turntablists and gave the great jazz pianist instant street credibility among the burgeoning hip-hop cognoscenti. Read more…