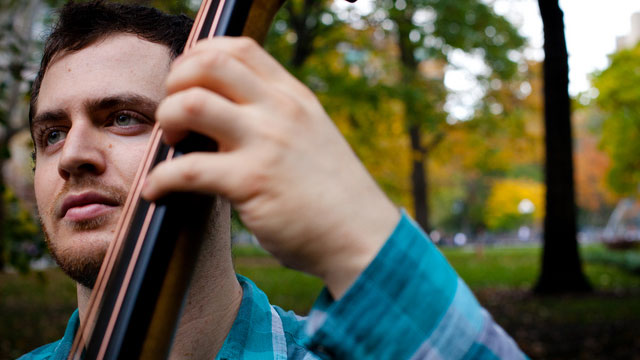 In the history of modern American music, bassists have forged some of the most enduring relationships with drummers. Among the most notable ones have been Charles Mingus and Dannie Richmond, Max Roach and Ritchie Powell and, of course Jimmy Garrison and Elvin Jones. Like Mr. Richmond, Elvin Jones went on to forge relationships with Dave Holland and Gene Perla, especially in some of his piano-free ensembles. In fact it was Mr. Jones who once suggested that it was with his bassists that he had to have an “immediate rapport” with to have anything like a “consistent rhythm” emerging in his music. This was probably what recommended the first-time relationship between Billy Hart and Michael Feinberg’s ambitious record, The Elvin Jones Project. In fact it also informs their performance with some exuberant highlights throughout the course of the set. Mr. Feinberg does not waste any time in the proverbial “warm up” as a prelude to the development of this kind of rapport. His symbiotic empathy with Mr. Hart and that drummer’s co-relative symbiosis with Mr. Feinberg is instantaneous, from the opening bars of David Leibman’s atmospheric “Earth Jones” featuring the plump, round notes of the bassist cast against the crisp splashes of brazen colour painted by Billy Hart on cymbals, punctuated by the rat-a-tat on his snares and superbly toned notes on the rest of his drum set. 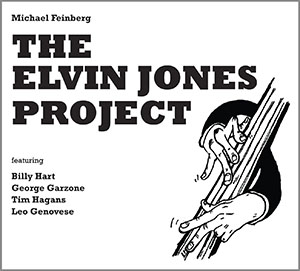 This is only Mr. Feinberg’s third record as leader and already he is showing signs of being a towering personality on his instrument as well as in his relationship with others in his ensembles. On this project, Mr. Feinberg also acquits himself with distinction in the marvellous dialogues he develops with the tenor saxophonist George Garzone. Mr. Feinberg not only “walks” with authority as Mr. Garzone’s solo unfolds with moist revelation on the tenor saxophone, but the colourful modal matrix also plays out in the intertwining between Mr. Feinberg and the ever-expressive piano solo of the young Leo Genovese, who virtually leads the bassist into a place where Mr. Feinberg ends up poking and probing the harmonic rivulets of sound that emerge where Mr. Genovese leaves off. “Taurus People” features a much freer structure and the rolling thunder of Mr. Feinberg’s bass and Billy Hart’s incessant tonal rattling of the drums is broken apart by some intricate improvisations by Mr. Genovese exquisitely transcribed for piano from the mystical and quite magical meandering of tenor saxophonist Steve Grossman. George Garzone provides a warmer touch to the tenor saxophone; quite the opposite of the icy and rococo rumbling of Dave Leibman’s work on the Elvin Jones original.

And so on it flows through the music of “It is Written” an original composition by Mr. Feinberg that harkens to the myriad colours that were painted by the musicians of the various ensembles that came to inhabit the realm of the various incarnations of the Elvin Jones Jazz Machine ensembles. This chart also shows Mr. Feinberg to be a composer of enormous thoughtfulness; one who can pay tribute to a whole sound created by Elvin Jones in his post-John Coltrane years. This is also true of the beautiful rewrite of Frank Foster’s melodic yet slightly sardonic wonder, “The Unknighted Nations,” which also features extraordinary work by guitarist, Alex Wintz and some of the most extraordinary trumpet soloing by the exceptional trumpeter Tim Hagans. In fact it is Mr. Hagans—a featured soloist throughout the record—who also is responsible for the magnificent overall sound of this project. It is also noteworthy that Billy Hart plays a magnificent solo, developed with deep regard for the rhythmic centre from which it emerges into a work of extraordinary melodicism and harmony, with its distinguishing notes centred inside exquisite rhythmic inventions.

Mr. Feinberg is absolutely masterful in his arco opening to the gorgeous re-imagining of Jimmy van Heusen’s “Nancy With The Laughing Face;” a terrific introduction that Mr. Feinberg shares with some wry drumming and piano work by Billy Hart and Leo Genovese respectively. Mr. Feinberg also follows up the arco piece with a fine melodic solo that leads to a lush interplay between George Garzone and Tim Hagans highlighting what beauty can be wrought by the moisture of the tenor saxophone and the muted wonder of the trumpet. Finally, few homages can outdo the beauty of “Three Card Molly,” a piece that Elvin Jones wrote for one of his most outstanding performances with the Elvin Jones Jazz Machine. Mr. Feinberg here only serves to underscore the success of his project; with some his most muscular playing that defines the mighty interplay between himself and all of the other members of his ensemble, most notably the ever-wonderful Billy Hart.

Michael Feinberg on the Web: michaelfeinbergmusic.com