Every record pressed by Michael Dease is a celebration of the trombone, the instrument he plays so exceedingly well. But Bonafide is different. Here the repertoire seems to call for a veritable carnival to fête the glorious bellow of this lugubrious instrument made from (up to) 9 feet of burnished brass. To do this he has assembled three other stellar practitioners of the instrument – Marshall Gilkes, Conrad Herwig, and Gina Benalcazar who solos holding up the challenging depth of the instrument – first on “Theme for Basie” by the great pianist Phineas Newborn Jr and then on r Dease’s own portrait (of) “Rufus McWhitman”. The result is a frontline reminiscent of Roswell Rudd’s mighty Trombone Tribe, one of the last bands of the legendary trombonist. 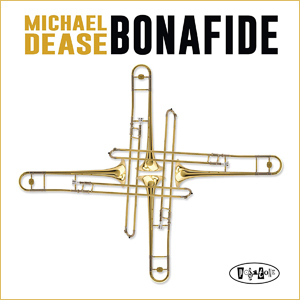 Mr Dease’s recordings have not reached as far as Mr Rudd was prepared to take his instrument throughout his life. However, Mr Dease is, relatively speaking, in the prime of his existence and he is still exploring the proverbial “visible spectrum” of his instrument. With Bonafide he may be reaching the boundaries of that instrumental continuum. Also as ever, Mr Dease employs daring rhythmic elasticity in his work – both in his own compositions and in those of others included in his repertoire – hence the one by Phineas Newborn Jr. – and the o0ne with which he kicks off this album – “Pearls” by David Hazeltine, which is a clever take on John Coltrane’s “Giant Steps” among other mesmerising and twisting musical allusions.

As a musician Mr Dease has a natural affinity for rhythm and the more complex and challenging it gets, the more he shines. This is what has endeared him to Brasilian musicians (Claudio Roditi, for instance, who almost a decade ago suggested that Mr Dease was “the man to watch”, having worked with him on Simpatico for George Klabin’s Resonance Records). Thus on this album Mr Dease pays it forward with a magnificent version of Johnny Alf’s “Nós”. But the real dazzle and sizzle on Bonafide, naturally comes from the harmonic brilliance and melodic counterpoint that marks the exchanges between Mr Dease and his trombone compatriots. “Rufus McWhitman” is just one of the gems on which this takes place – and it is here that Miss Benalcazar’s gravitas, articulation and control is on display’ as well as the impeccable performances of rest of the musicians who “slow-drag” their way through the work’s tantalising rhythm.

Throughout its musical hour and then some, Bonafide features beautifully crafted arrangements – especially Mr Dease’s own work – of beguiling variety and sensuousness, in every lovingly caressed phrase. On “Coexist”, for instance, he shares the rippling grooves with Marshall Gilkes and the great Conrad Herwig. Listening to the way in which the trombonists seductively bend the notes; and also listening to how all four of them sculpt the sustained inventions of the earlier “Theme for Basie” it is clear that there’s not a single semiquaver that hasn’t been fastidiously considered. Tenor saxophonist Sam Dillon makes noteworthy contributions on “In Walked Wayne” by the great trombonist JJ Johnson and “The Real Deal” while Mr Dease’s rhythm section comprises masterful virtuosos in their own right. Mr Hazeltine, bassist Todd Coolman and drummer E.J. Strickland are also fully attuned to Mr Dease’s creativity and vision; all of which makes this recording a certifiable masterpiece.